This tutorial details how to mark a disk partition as active in Windows 10. Modern day operating systems are highly capable, and come pre-installed with a bevy of applications, more than sufficient for taking care of the productivity needs of casual users. However, for the more advanced users, these applications don’t really cut it, so they use not just one, but a handful of third party applications. And out of these, there are some who find the idea of having a single OS running on their computer laughable, and hence, set up their systems in dual-boot configurations.

I’m sure you all are pretty aware about dual-booting your computer with multiple OS’, and how you can go about doing the same. But has it ever happened, that your computer always boots up the OS other than the one that you actually want it to, every time it starts up? And that too when you’ve all the boot settings configured the way they should be. Frustrating, right?

Chances are, that the disk partition having the OS that you want the computer to want boot up isn’t marked as the active partition.

How To Mark A Disk Partition As Active In Windows 10?

In the simplest of terms, when a hard disk partition is marked as active, then the computer utilizes the bootloader (the system program responsible for booting up the OS) stored on that partition. This can come in really handy when the boot sequence on a multi-boot system on a computer is out of order, even after properly configuring all the boot settings. However, it’s very important to note that you should never mark a partition that doesn’t have an OS on it as active. That’s because doing it will make your computer to not boot up at all.

That being said, marking a disk partition as active is a fairly simple and straightforward process. Here’s a little step by step tutorial, illustrating how to do it:

Step 1: Right click on This PC and select Manage (requires administrator privileges) to launch the Computer Management sub-module. Once there, use the navigation pane to go to Storage > Disk Management. 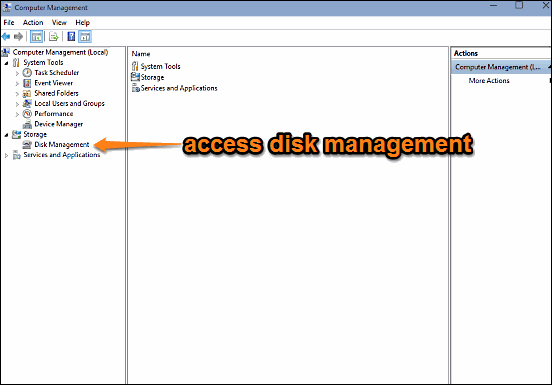 Step 2: The right pane will now display a listing of all the disk partitions currently available on the system. The disk partitions are also displayed as horizontal bars below the list. To mark a partition as active, simply right click on its name (or bar), and click on the Mark Partition as Active option. Here’s a screenshot: 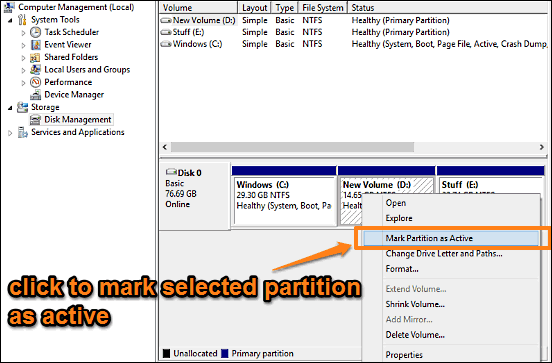 That’s it. You’ve successfully made a disk partition active, and the computer should utilize the bootloader stored on it, when it boots up the next time.

See Also: How To Run Important System Tools From One Place In Windows 10?

Computers set up in multi-boot configurations are fairly common these days. However, there may be times when the PC doesn’t boot up the OS you want it to by default, even when the boot sequence settings are correct. At those times, you can try marking a disk partition as active, to see if that works.