Here’s a list of 5 QR code generator software for Windows 10 which can be used to generate QR codes on Windows 10 powered devices.

QR codes are a great method to quickly transfer information from one device to another. Usually it’s used to send short text snippets, contact info, URLs or something else along these lines. Generating a QR code is easy with the applications from the list down below. Let’s see how it is that they work. 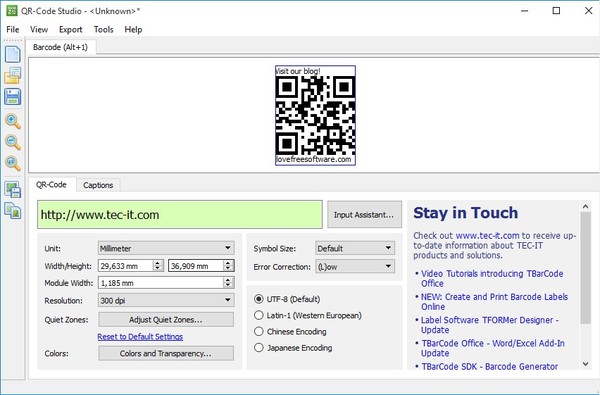 Interface is pretty straightforward. The most important portion of it would be the input field just below the QR code preview section. Interesting feature found in QR-Code Studio would definitely be the “Input Assistant”. Input Assistant will allow you to easily generate QR codes for vCards, bank account details, social network profiles, “mail-to” links, call links (for Skype) and more. Assistant will display an input form where you need to type in info and generates QR code with appropriate formatting (so that vCard is recognized as a vCard). Export of the finished QR code can be done to the clipboard or as BMP, GIF, JPG, PNG or TIF image. 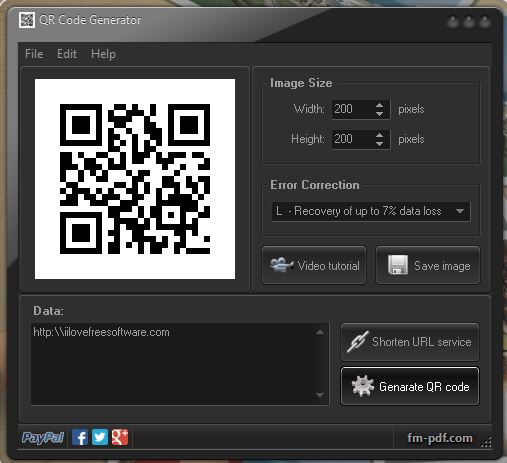 QR Code Generator is a QR code generator software that has one of the nicest interfaces out of all the applications that I tested. You can see it in action on the image above.

It’s also quite simplistic and easy to use. Just type in the data that you’d like to turn into a QR code in the bottom left corner text box. After that you can customize the QR code image size. Error correction percentage is also customizable. A quick link is given to a URL shortening service, but it opens up in a web browser. QR code preview changes after clicking on the “Generate QR Code” button. When you’re done with setup, click on the “Save Image” button to save the QR code. PNG is the only supported format.

Also have a look at Color QR Code Generator with Logo and Background Image. 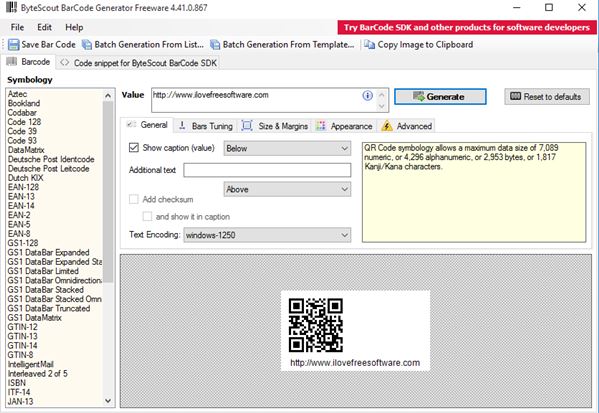 Bytescout BarCode Generator is an even more advanced QR code generator than QR-Code Studio. Features that make it stand out from all the other applications that I tested would be support for batch QR code creation, support for dozens of other types of bar codes, and highly customizable code appearance.

Batch QR codes can be generated from lists of entries, URLs for example, each URL in a new line. It can also use templates (like a counter that adds numbers next to a word, Contestant 1, Contestant 2, etc.). It’s highly customizable. Appearance wise, you can tweak captions, text size, font type, QR code size, color and more. Use the left sidebar to choose between about two dozen different QR code alternatives (like standard store bar codes). Code appearance is tweaked on the right. Supported formats include PNG, TIFF, JPEG, GIF and Bitmap. 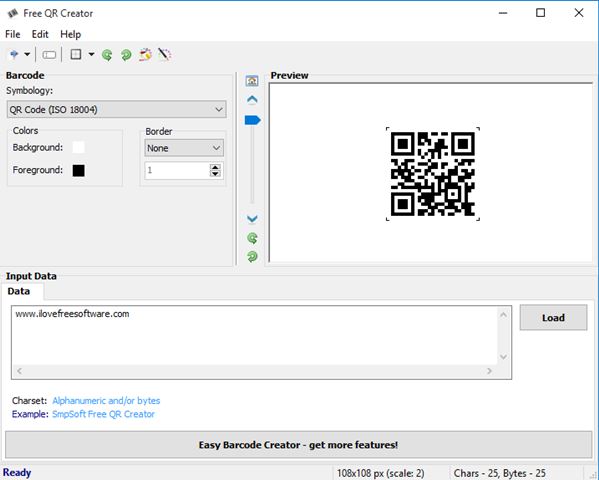 Free QR Creator takes it back a notch, it’s simpler than Bytescout BarCode Generator, but it still has a couple of interesting features up its sleeves. For starters it lets you load up actual files and turn them into a QR code. Note that there are size and format limitations (you can’t turn a movie into a QR code).

2 basic QR code sizes are available, micro QR code and ISO 18004 QR codes. Their colors and background are customizable, see image above. Changes are made to the QR preview in real time, as you’re changing the text in the input text box in the bottom left corner of the screen. Select “File >> Export” when finished with setup in order to save the setup QR code. They can be exported as BMP, JPG, PNG, GIF, TIFF or EMF.

XRen QRCode is an extremely simplistic QR code generator software for Windows 10. Setting up a QR code requires you to type in or copy/paste the data you want converted into the large text box that takes up the left-hand side of the UI.

Despite being simplistic, XRen QRCode does offer a couple of features that I thought are interesting. For starters, it supports both QR code creation and decode. You can load up QR code images, hit the “Decode” button and the QR code data is going to be shown in the text box on the left. Secondly it has a built-in screenshot tool, which failed a couple of times for me, unfortunately. Lastly it also offers quick input forms and tools for things like vCards, address, bank details, and more. All the common image formats are supported for QR code export.

Each of the 5 QR code generator software from the list above worked great, and has something interesting to offer. QR Code Generator I like because it’s perfect for those who just want a simplistic QR code generator. Plus it has a really nice UI design. ByteScout BarCode Generator is super advanced, perfect for those that are looking for extra features.