Animagraff is an absolutely amazing and informative website that lets you learn how things work. Utterly gorgeous to look at, Animagraff uses animated computer generated graphics to demonstrate the working of a couple of cool things. Animagraff lets you know the detailed working of things like a car engine, a handgun, a flat screen display, and even a complete jet engine. It even has animated tutorials telling you about Cheetah’s speed and then, one that lets you learn how to moonwalk. Animagraff also details working of the constituent parts.

Granted, as of now, Animagraff features only a handful (just about seven) of these goodies, but that’s not a bad thing. On the contrary, it’s great, considering that this website is strictly a one man endeavor, the work of a Portland, OR based Graphic Designer. The content may be less, but the quality of these animated reference tutorials is incredible.

I see that you’re already getting intrigued. So let’s hop over to Animagraff to find out more. 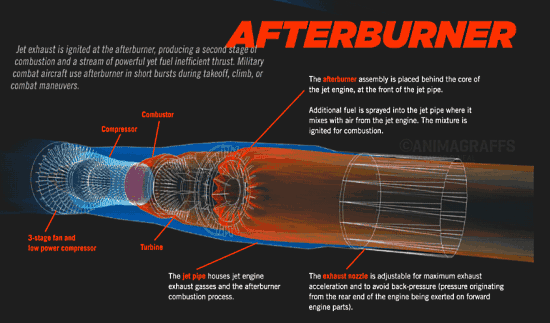 Once you head over to the website, you’ll see the different animated tutorials listed in a grid like fashion. As mentioned before in the article, there’s just a handful of animated graphics based tutorials on the website as of now. These are listed below:

That’s just about it. Apart from that, there’s just a search bar that lets you search the website for the animated graphic tutorial that you’re looking for.

How to use this Free Website to Learn How Things Work?

Well, using Animagraff is ridiculously simple. That’s because there’s nothing involved. There are no accounts, no sign-ups or anything of that sort. Just incredible animated computer generated graphics to look at and learn from. To view an entire article, simply click on the view graphic link under it.

Here’s a bunch of screenshots, illustrating the insanely detailed animated graphics. The screenshots are from the tutorial graphic: How a Car Engine works? 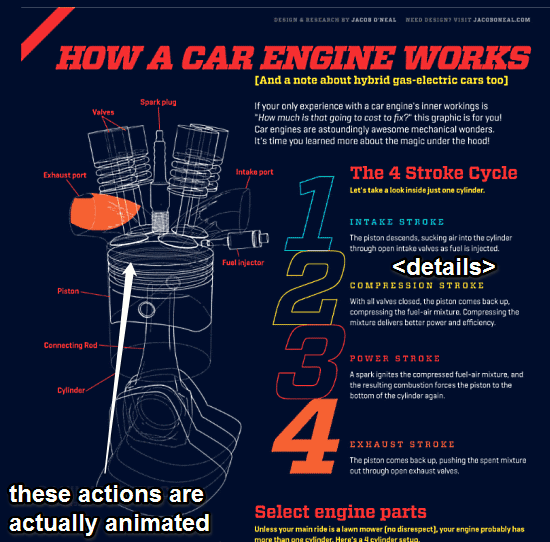 Pretty dope, don’t you think? As illustrated by the above screenshot, the computer generated graphic consist of detailed working of the technology/product in question (a car engine, in this case), explained in well documented steps. There’s also a ton of additional information to go with it.

Here’s another screenshot (from the same animated graphic), explaining the working of a car engine in a bit more detail. Check that when the graphic consists of more than one animated (moving) part, they are color coded to provide a clearer distinction between multiple elements. 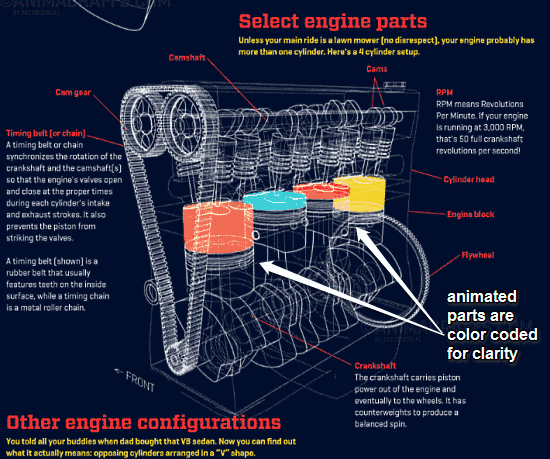 And here’s another one. Everything from the movement of the parts, to the flow of the liquids through the pipes is animated and clearly distinguishable, thanks to the color coding and wire frame like graphic designing. That’s some incredibly detailed stuff! 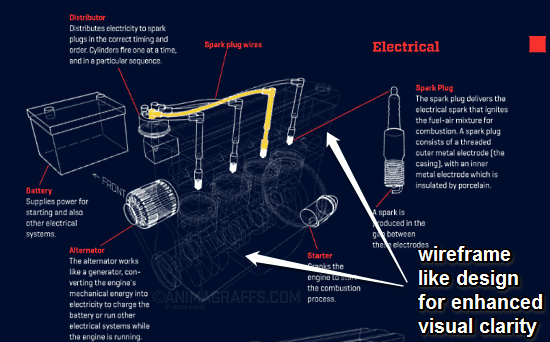 Animagraff is an amazing website to learn how things work. The level of effort that has been put into crafting each of these computer generated animated tutorials is just great. Though the quantity of the tutorials is quite less, but the quality is top notch. Personally, I would love to see what the developer has in store for future. If you’re looking for a website that shows how things work, in a way that’ll make you go through one thing again and again, head over to Animagraff.