Here’s a list of 5 timer apps for Android which you can use to setup countdowns for when you’re exercising, cooking, working on a project, or when you just need to wait for whatever it is that you’re doing to be finished, for a paint to dry when painting perhaps? Android timer apps can help you out in all of these situations. With the apps from the list down below you can change your phone or tablet into a timer.

These are some of the more interesting apps I found. 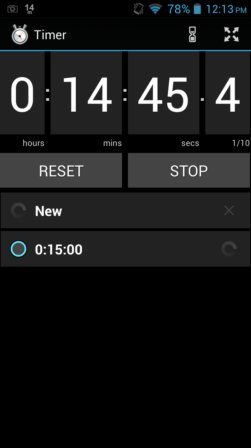 Stopwatch & Timer lets you measure time both forwards and backwards, meaning it’s both a stopwatch and a timer app.

When you first run the app you’ll see the stopwatch app open for you. You’ll have to tap on the timer icon in the top right corner to switch to the actual timer. Before the actual countdown starts like the one on the image above, you’ll have to set the timer in a pop-up config window. 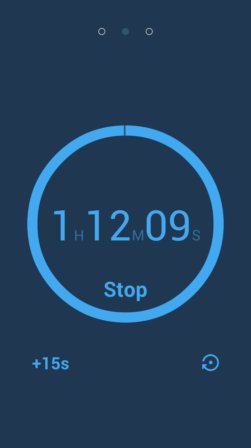 Timer is adjusted by swiping your finger around the dial, similar to what you would be doing if you were winding an actual clock timer, only this app is digital. You can set hours, seconds or milliseconds. Timer interface comes in three colors, red, green and blue.

Also have a look at Chef’s Kitchen Android Timer App. 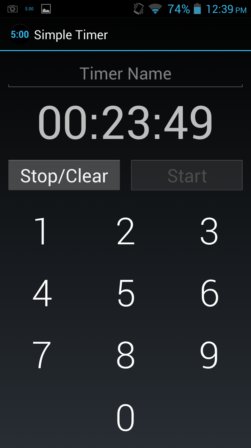 When setting up Simple Timer you use the dial pad at the bottom of the screen to setup the timer. When the countdown is setup, tap on Start to start the timer.

You can write a name for the current countdown by tapping on the Timer Name field at the top of the app. Notifications (with vibration support) are available to let you know that times up. 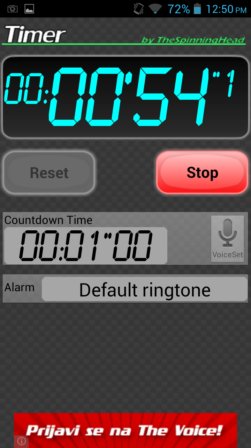 Timer by TheSpinningHead has pretty much the same features that all the previously mentioned apps have, with a couple of additions.

First it keeps you notified for every minute that elapsed on the timer. It also allows you to set the time using voice commands, notice the microphone button in the middle of the app screen.

Also have a look at Android Timer App to Set and Run Multiple Custom Timers. 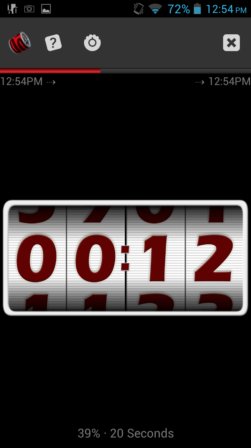 These dials, You adjust it by swiping up and down, hours, minutes and seconds. App presets that you can configure for it to for example to wake you up tomorrow at 7, in a couple of hours (that you set), etc.

Out of the apps from the list above I suggest that you give Time by Go Launcher Team and Countdown Timer a try first, although you can’t go wrong no matter which one you choose. Let me know how what you think in comments down below.