Here are 5 free software to compare folders between different PCs. These software analyze two directories from two different computers and give you the details about the differences that they find. Some of these software also come with folder synchronizing feature to help you maintain same files in both the folders that you are comparing. After comparing the two given folders, some of these software can generate a report that you can export as HTML, CSV, etc.

Sometimes you end up having so many duplicate files in various folders of the different PCs that you use. And to get rid of them, you can use these free software. These software let you generate a full report of the two given directories which are on different PCs. And after getting the comparison result, you can do whatever you want with the files.

If you are wondering how to add a folder on your PC from another PC, then worry not. The following article will help you with sharing and accessing folders over different PCs: How to Access Another Computer’s Disk Drives or Folders. 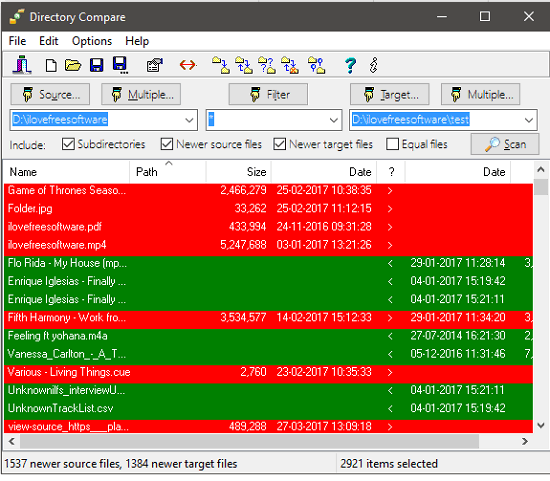 Winmerge is a free software to compare folders between different PCs. The software is quite powerful and analyzes differences between folders in side by side pane like interface. It shows the list of all files from both the folders along with comparison result. In the comparison result, it shows which files exist just in the right folder, which files exist in the left folder only, and which files are common. You can easily analyze the differences, and if you want, then you can synchronize the folder contents as well (synchronization is not a necessary step). When you have compared folders on different PCs using Winmerge, then you can also export the report of the comparison as HTML, CSV, TSV, and XML file. 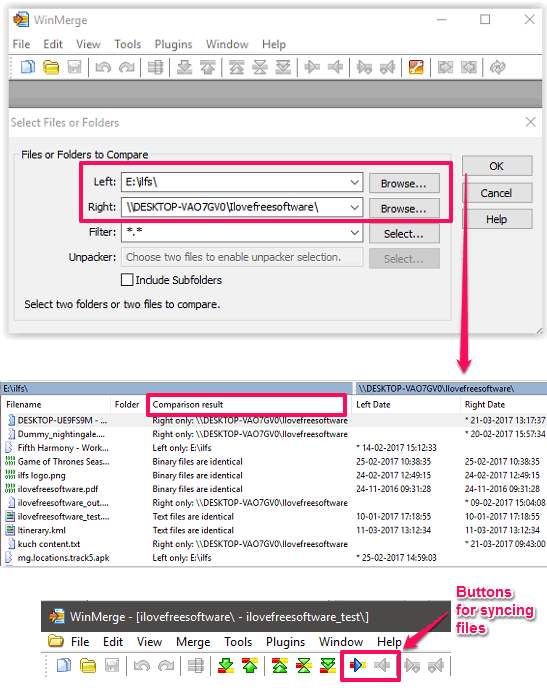 It’s pretty easy to get started with Winmerge to compare folders of different PCs. Just download it from the link above and then install it. After you launch it, you will see its interface. Click on the File > Open menu and then that a dialog will open, where you can give the path of the folders: one from your PC and another from a different PC. Next, hit the OK button and it will quickly list all the differences that it finds. After getting the differences, you can either synchronize the changes or just generate the report and save it. For synchronizing files, there are buttons given in the toolbar of the software, and to generate report, go to Tools > Generate Report.

Directory Digest is quite a unique software to compare folders between different PCs. It uses a different technique to compare folders of different PCs called digest. It creates a digest of a directory, which is actually listing of files and other information which is required to detect changes in the directory. And you can use this software to compare directory of a PC which is not in your network. It uses the digest files of the directories that you have to create, then use them to compare two folders. We have already covered a detailed review and tutorial of using Directory Digest software at: How To Compare Directories Different Computers.

BS Folder Compare is a dedicated free software to compare folders between different PCs. The software behaves  differently and in spite of giving the report in the software interface, it uses your PC’s default browser to show you the comparison report in HTML format. In the report, it lists the non matching items of the folders that you are comparing. Also, before starting the comparison, you can use filters to include/exclude specific file types. 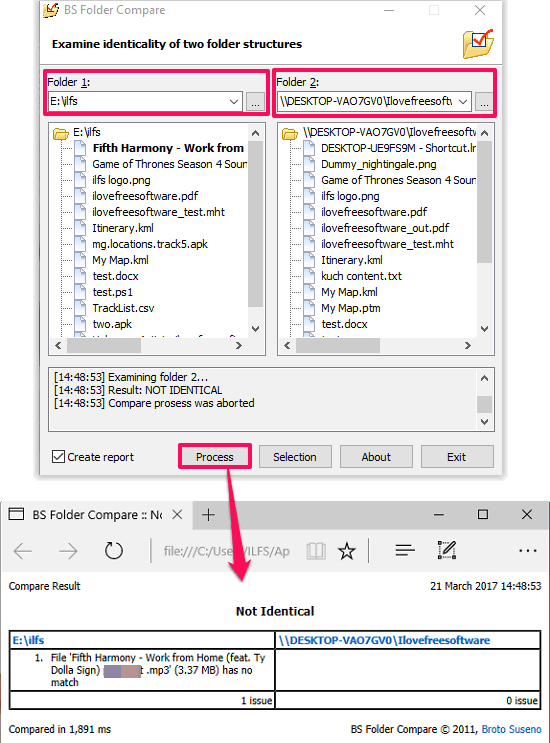 BS Folder Compare is very simple software, and after installing you can start using it by specifying two folders of your choice. After launching the software, its main dialog will pop up, where you can specify two folders that you want to compare in the Folder1 and Folder2 fields. After that, hit the Process button and it starts the comparison process. And when it’s done, it will open the report in your default browser. See the above screenshot.

Directory Comapre is another dedicated free software to compare folders between different PCs. It is quite a powerful software as it can compare the two different folders of different PCs and also lets you sync files between them. This software uses two panes to show the differences between source and target directory and also shows which files are missing from which side. It makes it pretty easy to spot differences, as it uses red and green colors to highlight missing files. Directory Compare uses red color to show files which need to be moved to the target directory and uses Green color to show files which need to be moved from target to source directory. 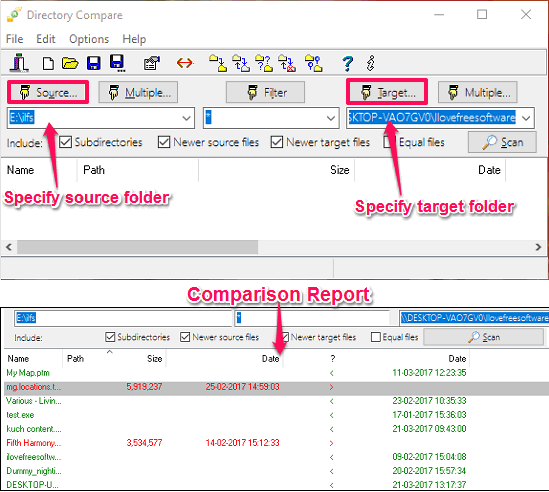 It’s fairly simple to compare folders of different PCs using Directory Compare. It also comes as a portable software, so you can start using it from the moment you have downloaded it on your PC from the above link. Launch its EXE file and then specify the directories by clicking on the Source and Target buttons from its interface. After that, hit the Scan button, and it will immediately list the comparison result in front of you. When it has listed the comparison result, then you can export it as a TXT or CSV file using the File > Export menu.

File Synchronizer is another free software to compare folders between different PCs. Basically, it is a file synchronizing software, but it has a feature to analyze the two given directories before syncing files. That’s the same process that you can use to compare two folders. File Synchronizer takes two directories to compare and then it only lists files that do not exist in the folder to which you are comparing it. However, you cannot export the report of the comparison in it like Winmerge. You can only sync files in one way or synchronize both ways via File Synchronizer.

It’s pretty easy to compare folders of different PCs using File Synchronizer. Grab its setup file from the above link and then install it. You will find its interface very simple and has two pane in it where it organizes the given folders. Specify two folders that you want to compare using the Folder 1 and Folder 2 buttons, and then hit the Analyze button. After that, it will list the missing files only, you can see the above screenshot.