Here’s a list of 4 Android photo cloning apps which you can use to create a photo clone effect on your Android powered phone or tablet. The clone effect that we’re talking about here is when you take several photos of a person in different locations, but without moving the camera, only the person in the frame changes position. By doing that when the images are combined together it seems as though you’ve cloned the person on the image multiple time, that’s the basic idea at least.

Lets see what we were able to find in the Google Play store when it comes to free photo cloning apps. 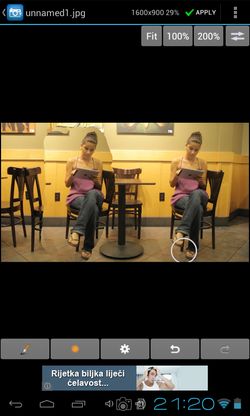 Most of the photo cloning apps that we tested allow you to create photos using the camera or alternatively by opening existing images from your gallery.

Photo Editor lets you do both. Next to the clone effect, which can be seen in action on the image above, Photo Editor also has a whole heap of additional effects like perspective, color adjustments and more. Images can also be edited (rotation, cropping, resizing, framing, etc). 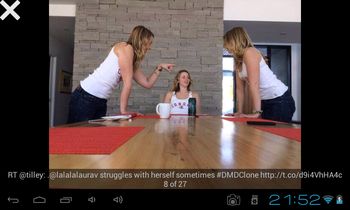 Photos can only be imported into the DMD Clone via camera, you cannot open existing images that you’ve created beforehand.

Great thing about DMD Clone is that it’s practically completely automated. There’s no need to use an editor to create the cloning effect. While using this photo cloning app, you’ll create multiple photos of yourself or someone else after which the app automatically combines the created frames into a photo with the cloning effect applied. See example on the image above. 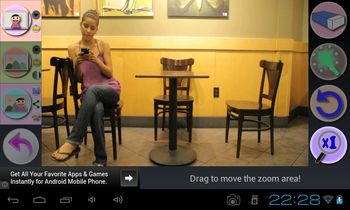 Technically speaking Join Camera is an app that combines two or more images into 1 image, it’s not a classic cloning app. Images that get combined can be created using the built-in camera app, or you can combine existing images created with your phones camera app.

App works by combining up to three images. On each of them the objects that’re cloned should be in a different position within the same camera frame. Once that images are fused together, all the objects within it will be seen on a single image. 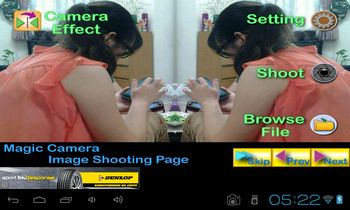 Magic Camera has a lot of interesting effects, but the one that’s important for us is the mirroring effect.

Mirroring effect is when the object on the image is of course mirrored so that it appears as though there are two of the objects on the image. Other effects are also available, concave, convex, mosaic, painting, etc., so you can create even more interesting effects. One advantage of Magic Camera is that you don’t have to create multiple photos with it. Only one photo needs to be taken, and you can see the effect before taking the photos.

There’s a lot of photo cloning apps available in the Google Play store, but sadly a lot of them didn’t work for us. Perhaps you’ll have better luck, so don’t just focus on the ones that we listed above. Out of these 4, we suggest that you try Photo Editor first and especially if you already have photos where you would like to clone stuff. Others are also very interesting, especially DMD Clone, so give them also a try and let us know which one you think is the best in the comments down below.