The digital age has brought with it the ease of contacting anyone we want, at the click of an icon. And even though it’s quite convenient and fast, nothing can beat the old times when sending letters was the only way to contact individuals we knew. If you are missing those days of literary-sharing and letter-writing, you should look no further than Lettrs for Android — an app which allows you to write retro-themed personalized letters right on your Android device. With Lettrs, you can add stamps and images, and personalize your letters with your own signature as well!

Not to forget that it is an irony of sorts that Lettrs for Android, is in fact an ‘app’ which tries to help you re-live those days! Read on to find more about this app.. 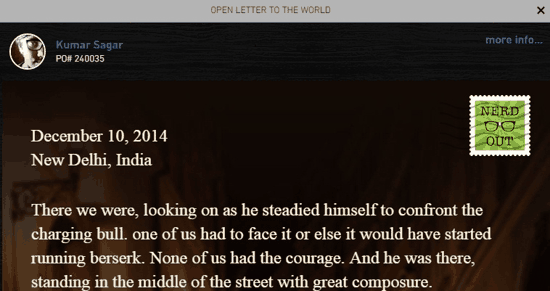 How to Write Digital Letters with Lettrs for Android

Lettrs for Android looks pretty and easy on the eye. But you do need to get around the UI to get familiar with the design principle in use here.

Open the app and you will be greeted with a screen similar to the first screenshot shown below. There are four options, as you can see. To start writing a letter you just need to tap ‘write a Letter’. You will then be asked to choose the type of letter you would like to write (second screenshot). Select whether you want to write a private letter to someone close or just write an open letter which will be submitted to the ‘Lettrs‘ community. 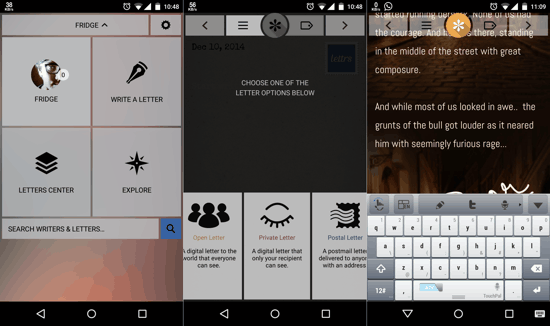 The layout is simple enough and will immediately take you to the screen where you can enter the text and tweak the way your letter shall look. More on Personalization in the section below.

How to Personalize your Digital Letters in Lettrs for Android?

Since we are writing a letter and that too in a digital medium, personalization options had to be good. And the app doesn’t disappoint!

As you can see in the first screenshot below,you can end all your letters with your own personalized signature.The letter theme can be changed too. Switching to a theme will change the text font along with the background. To switch themes, you just need to tap the asterisk button on top. This will pop open 3 more icons. The left one for themes, the one in the middle for location and the one on the right for adding an image. To change theme, tap on the stacked ‘theme chooser’ icon and you will be shown themes in a side-scrolling fashion similar to the way it is in the third screenshot below. Just tap a theme to apply it and personalize your letter. 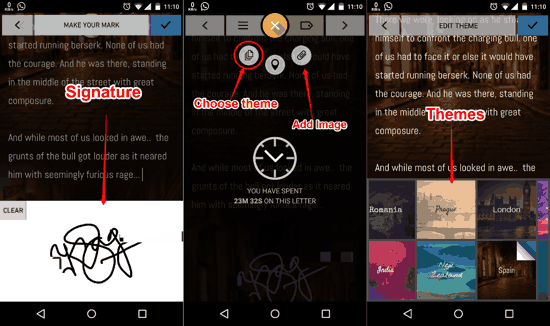 Oh wait! The personalization options don’t end there! At the top you will see a stamp  too, and can change it by tapping on it and selecting one of the available designs. There are numerous available from different regions of the world and several statements of intent (I had to Nerd Out, so I selected the stamp with that name in the test letter above).

You can share your open letter with anyone by sending them the link, whether they are part of the Lettrs community or not. Even if you have written a personal letter, you can share the Letter via an email or their Lettrs id. And, the person on the other end doesn’t even need to have the app to view the letter.

If you are looking for an app to write personalized letters, Lettrs for Android is definitely worth a try. I did notice a bug wherein tapping the ‘Clear’ button in the signature entry screen wasn’t really clearing the signature I had already entered. But it might be a one-off device specific bug which shall be squashed sooner rather than later. Until then, remember to enter your signature corrrectly in one go, specifically users who don’t have a stylus and hence have to enter the signature with their ‘fat’ finger-tips instead. Other than that, there are no glaring issues, and the personalization allows you to create letters which you can really call your own. This app has already claimed its place in the ‘Best Android Apps of 2014‘ list by Google, so it’s worth taking note of.

Give it a spin to remember the age gone-by. And do share your open letters in the comments section below!