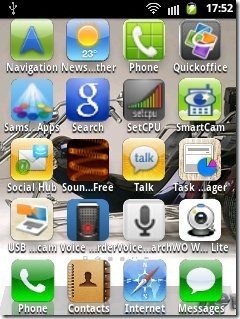 In comparison to Go Launcher app, this Android Espier Launcher app works far faster and better on Android. However, in terms of features, Go Launcher is one of the best launcher app in Google Play Store.

After applying the launcher, you will see your desktop background unchanged. Also, many app icons like email, camera, clock, contacts, browser, messages, dialer looks similar to icons on iPhone.

One of the limitation that holds back the launcher of completely making Android look like iPhone is the status bar. The launcher app has no effect on the status bar of your Android phone. It remains same as it was earlier i.e., default.

The description of the app says that you can hide applications on your Android phone, but when I tried to hiding the applications installed, I was unable to do that. Let me know if you are able to make that work somehow.

How To Give iPhone Look to Android:

When you run this launcher, you will find your Android phone look like iPhone. If then also, you find the previous launcher, just press the home button and then complete the action by selecting Espier launcher as your default launcher. There you are finally set and start using the great iPhone launcher app for Android.

Features Of Launcher App To Make Android Look Like iPhone:

You can search for Espier Launcher app in Google Play Store. If not, then click on the link to download the app or to get the direct download link, just scan the QR Code below. 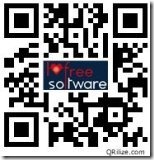 Just Experience the feel of iPhone on your Android phone without spending extra bucks on new iPhone with Espier Launcher app. If you know of any other similar launchers, do mention in comments.