Towers of Hanoi 3D is a free Windows 8 puzzle game app. It’s a simple but not so easy game, where you have to put a given number of disks of different sizes on top of one-another and take all the disks from the leftmost tower to the rightmost tower. Well, the game has a twist, you can’t put a bigger disk on top of smaller disk, and you can only move one disk at a time. This Windows 8 puzzle game is totally based on the popular Tower of Hanoi; a mathematical puzzle game.

So if you like to challenge yourself, or love solving puzzles, then this is the Windows 8 game app for you. The game has no time limit or certain number of limited steps. You can play until you won’t solve the puzzle or get jaded. 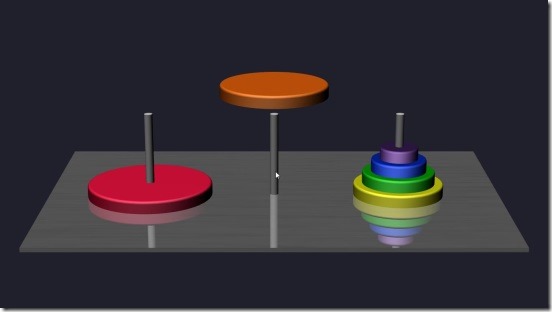 Playing the game in Windows 8 devices is fun, specially those who are into puzzles will definitely love this game. The strongest point of this Windows 8 puzzle game app is it’s gameplay, which dates back to more than hundred years. The game is said to be originated in India, where the Brahmin priests used to move the golden disks in accordance to immutable rules of Brahma (Hindu god), and was first publicized in the west in 1883. The game is in 3D and the graphics are okay.

However, the controls are bit jerky. But, good thing is that they are pretty easy. All you have to do is click on the disk and click on the desired tower. Like I said above, the game’s objective is to move the complete stack of disks from the leftmost tower to the rightmost tower in such a way that at the end, all the disks gets stacked in the rightmost tower in ascending order of sizes, that is smallest on the top and biggest at bottom, making a cone shape. Also you can move only one disk at a time and only smaller disk can be placed on top of bigger, not the vice-verse. 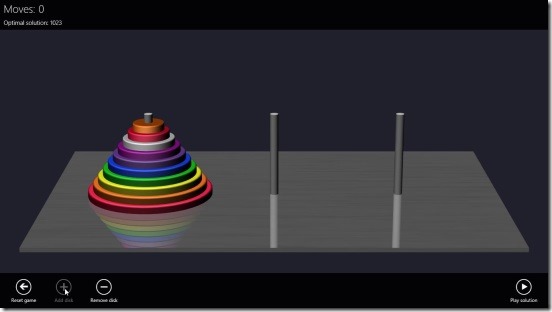 At some points you might find the game is not possible to complete. Well, each game is achievable and has certain number of moves under which it can be achieved. This Windows 8 puzzle game app also shows the number of moves and the total number of moves you made on the top left corner of screen. Using this feature you can know how close and how good are you in solving the game. Also if you are finding the game too hard to solve, then you can see a quick solution of the puzzle, by clicking on Play solution button in bottom flyout. The solution is helpful but not too helpful as well, because it plays the solution so fast that, you can’t remember the exact moves. 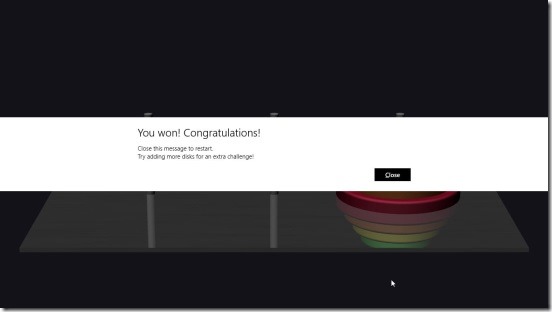 So, if you really like to challenge yourself, then get the game and try solving each puzzle.

If you are into more puzzle games then do check out these free Windows 8 puzzle games: Doodle God, Microsoft Mahjong and Bubble Star.

Get this Windows 8 puzzle game app from the Games Category in Windows Store, or download here.