Microsoft Mahjong is a free Windows 8 Mahjong game app, which lets you play Mahjong on your Windows 8 PC. For those who don’t know what Mahjong is, well it’s a strategy game originated in Eastern and Southeastern Asia, that requires solving a puzzle by matching similar tiles. Mahjong has gained popularity in West Asia as well.

Traditional  Mahjong has a total of 144 tiles, having different Chinese symbols and some colored figures. Likewise, this free Mahjong game app also has multiple tiles having same set of symbols and figures as the classic one has. The objective of the game is to match identical tiles, and finally removing all the tiles from the screen. You can play games of different difficulties, take daily challenges, change the background theme, view your stats, and win different medals and coins by completing each game.

This free Mahjong game app is present under the Games Category in Windows Store. 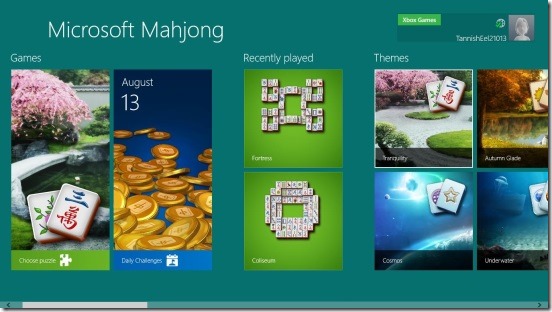 Like said before, this free Mahjong game app for Windows 8 is an imitation of the classic Mahjong game. This game requires your brain, because you have to think ahead before you make a move and match the tiles; sometimes matching the most obvious tiles, may take you to a point where there will be no matching tiles. The only prerequisite to play the game is to have a Microsoft account.

The game sounds very simple, as it has an easy objective of removing all the tiles from the screen by matching the identical ones, provided they have at least one side free and no tiles are covering them. But it is not that easy as well and like said before, you may end up with tiles which have no identical copies of themselves.

This free Mahjong game app is beautifully designed. The interface looks remarkably pleasing. The main screen is well categorized and the animation, scrolling is smooth. Ads are there but it doesn’t  bothers much as they won’t come pop up while you play. Playing in full screen adds a whole new level to the gaming experience, plus it has good background sound. Also, the provided themes are amazing. You can choose from four beautiful background themes. 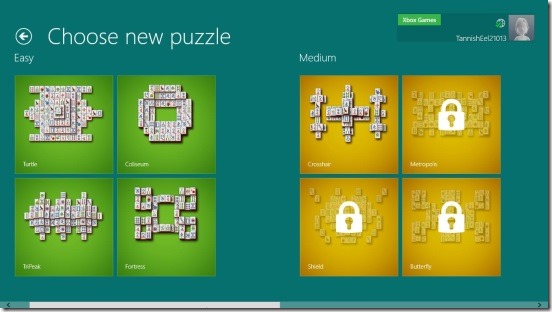 You can play the game in two modes: The first one has four types of difficulties, and each difficulty has four stages. Finishing one stage unlocks next stage, there’s no time limit and you’ll be in race with yourself, that is finishing the game as fast as possible. If you get stuck in between the game, you can always undo back to the desired step and continue again. But undoing reduces your score. Besides undo you can also reshuffle the tiles without costing anything on your scores, but reshuffling is limited. You can also use hints in between the game. 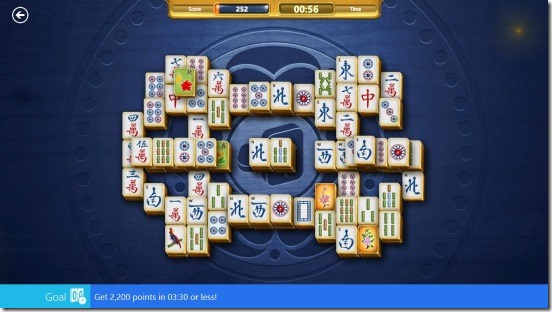 In the second mode, you’ll get daily challenges, in which along with playing Mahjong you’ll have to meet some challenges like finishing the game in 4 minutes, match at least 10 tiles in one minute, etc. You can’t use hints and undo’s in this game mode. 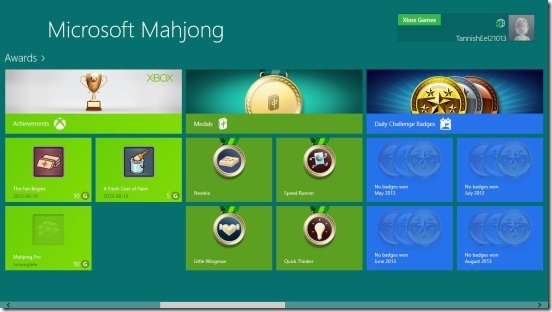 At the end of each game, you’ll get lots of flares flying all over the screen, which looks really beautiful. Finishing each game of standard type gives you medals and finishing daily challenges gives you coins.

Microsoft Mahjong is absolutely good Mahjong game app. The features and gameplay makes it get going. It is a really good medium to exercise your brain and sharpen your memory. Plus it kills time. The game is easy but complicated at the same time in its own term. Definitely a must have free app for Windows 8.