8start Launcher is a free application launcher which will solve the problem of cluttered desktop icons in your computer. This free desktop organizer has all the features that a standard launcher needs. It is a lot more than just an ordinary application launcher. With its unique features and user friendliness this desktop organizer will make you habituated to be organized. 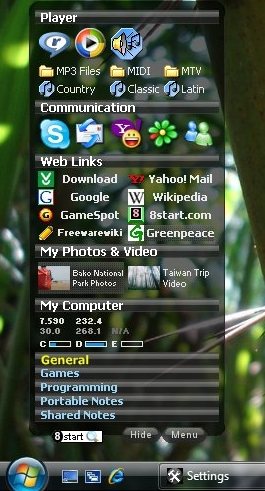 The concept of launchers is getting very popular in different devices like mobiles, tablets, PCs for a very obvious reason, it saves your time. And when speaking of saving time 8start launcher does it best. Usually what we can see in Windows desktops are tons of icons for different applications which also makes the machine noticeably slow. So a speed hungry user always has to keep a balance between performance and user friendliness. But when you are using a free application launcher like 8start you are going to be blessed with a lot more than just a launcher. It is at the same time customizable, portable and of course lightning fast. You can separate different applications in different tabs and get there only by one click. It has extra features like Tree Notes and a countdown timer right in your taskbar which is always ready to start. You can skin this software according to your own test. At the very basic it gives you two advantages. One is clearing up the clutter in your desktop and other is lessening the use of windows explorer as all the programs are right at the desktop without slowing down your Windows start up. In addition to that you get tons of features which will increase as the software is continuously improved and perfected.

You can also try GridMove, Aquasnap and BBox to organize your desktop in various ways

This free desktop organizer is only 1.8MB in size and requires Windows Vista, XP, Windows 2003 and Windows NT.