Backupify is a free service that provides automatic daily backups of your online data from websites like Facebook, Twitter, Flickr, Google, and more. More and more of life is being spent online. Facebook and Twitter can track our every move (for some people even more than their every move). Flickr and Picasa get our pictures so that everyone in our life can see them. What happens if something happens to one or more of these sites? Most of our life is gone. If you have a social media backup, such as can be found at Backupify, everything that you post on your social media is safe. 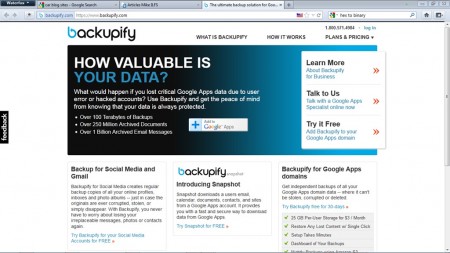 A Variety of Social Media Options

Twitter, Facebook, Linkedin, and Blogger are just a few of the available social media websites that your data can be backed up from. If you have image storage accounts on Flickr and Picasa, you can back those up too. The various Google applications are also available for backups. With the free option, you can pick three of the thirteen available sites and applications to back up. Backups are completed on a weekly basis for free users.

If you choose to backup Google Apps, you’ll be able to search, archive, and restore your apps in case of loss. Technical support for free users is by email only. 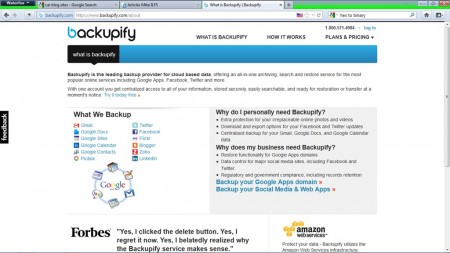 Free users of Backupify are allowed up to one gigabyte of backup storage on the Backupify servers. If you’re like me, that just MIGHT be enough to backup all of your images on Facebook. Add Flickr, and forget it. I have literally thousands of images in my Facebook image albums. When you add in my Flickr account, as new as it is, that number can go as high as tens of thousands. Not all of my images are small, either. So, this 1GB limit seems pretty small. 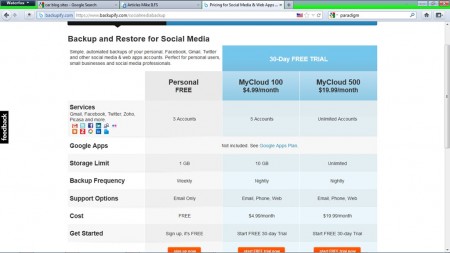 Not For Me, Thanks

For some people, an online backup service might be a great idea. Lose some data while you’re on a trip and it’s easy to restore. I can wait. All of my important pictures are stored on three websites, and two external hard drives, along with one in my computer. Something REALLY bad would have to happen for me to lose ALL of them at once. As far as my Twitter feed and Facebook page, it won’t end my life if their servers crash, and everything I’ve done over the last year or two is lost.