Here is a list of 5 Best Free Android Apps for Remote Desktop Access. These apps can be used to access your Windows PC remotely using your Android device. What these apps do, essentially, is that they broadcast the current screen from your Desktop PC to your Android device, and hence you can control various actions on your PC without physically being present there. These apps allow you to utilize several essential functions of your Desktop right on your Android device. While the two big names – Microsoft and Google have their respective apps, there are some other great third-party options as well. Take a look!

Hold on a sec! If you are looking for apps to Remote Control your PC, you should take a look at this article rather than scrolling down. 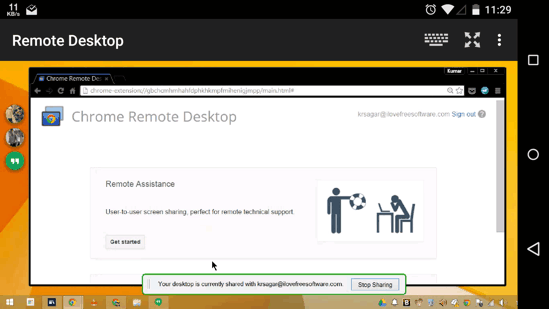 Chrome Remote Desktop is an easy-to-setup way of getting Remote Desktop Access on your Android device. But there’s one caveat here — Google Remote Desktop requires a Chrome Extension to run, and hence, might not be too good an idea for users who do not prefer Chrome. The app’s interface is extremely minimal and Connectivity is pretty good as well, but the initial setup isn’t as convenient as you’d wish it to be. And, when you connect your device, your desktop PC will automatically show an overlay which will notify you that the Remote Desktop Access Connection is Active. And yes, the connection data is kept in-sync with your Google Account. 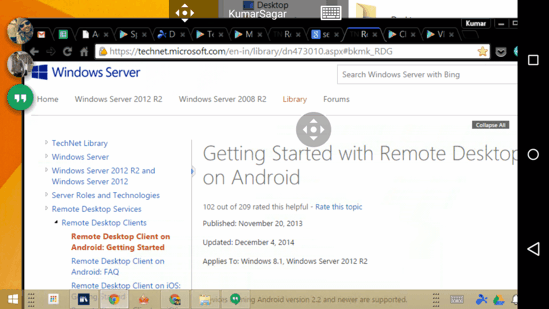 Microsoft Remote Desktop is one of the simplest Android apps to remotely access PC from Android (and is also the “official” one from Microsoft). While the setup might seem cumbersome to some users, the way it handles Desktop Access is pretty satisfactory. You can choose to view a zoomed-in mode and drag the screen around using the overlay scroll button in the middle of the screen, or just use the Mouse pointer by dragging it. The performance is mostly good too. One thing to note here is that as and when the Android app connects with your Desktop PC, your PC screen will automatically log you out. Hence, you can only use your PC from one place at a time. But, you can also not forget the fact that this method does not require you to install any app, client, or extension on your PC, as it uses the default functionality built into Microsoft Windows. 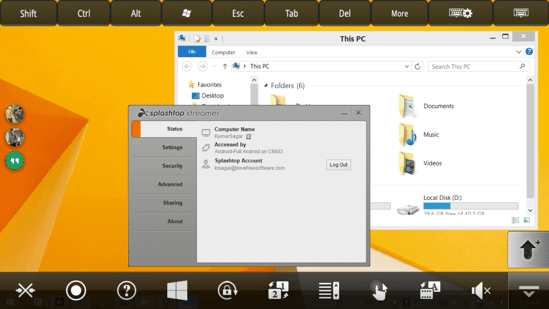 Splashtop 2 for Android is one of the best third-party Android apps for Remote Desktop Access. The setup is easy, and only requires you to install the PC Streamer and the Android app. Your devices are automatically connected to each other when you login to the common Splahtop ID on both of them. You might love Splashtop due to the fact that it can handle even the touch gestures that Windows 8 supports! Not to forget that the built-in toolbar is pretty effective with small tools like a scrollbar (kind-of a virtual avatar of the scroller in your USB Mouse), keyboard, touch mode, Lock, etc.; and makes Splashtop one of the most well-rounded Remote Desktop Clients. 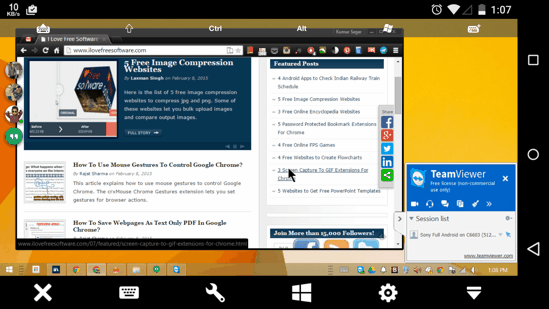 Team Viewer is available on a range of platforms, and is one of the most popular Android apps for Remote Desktop Access. Team Viewer for Android can be used to access your Desktop from almost anywhere, and just requires you to create a Team Viewer ID. Once you do that, you can access your desktop from any other device having Team Viewer app installed — just by entering the device id and the password. As can be seen in the screenshot above, as soon as you connect your device to your Desktop, the Team Viewer Desktop client will automatically snap to the lower right corner of your desktop. Head over to the official website to get the Desktop client now! 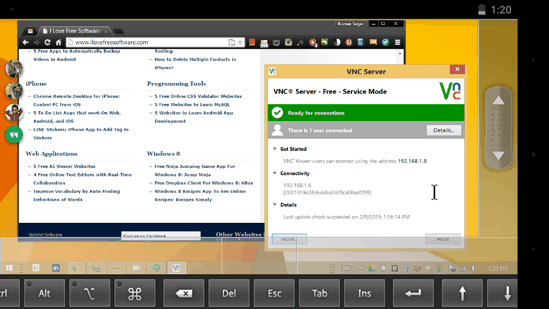 VNC Viewer is another app with a long-standing name for itself in the Remote PC access from Android genre. The setup of VNC Viewer requires a bit of an effort as you have to Install the desktop client, then get the free license from the official website (there are paid licenses too, which give you an encrypted connection), activate the Desktop client using the License key, and after that complete the setup procedure to connect your VNC Viewer app for Android to your Desktop. VNC gives you almost all the standard keyboard functions in a toolbar, and the trackpad mode adds the mouse buttons and scrollbar as an overlay to your screen (as can be seen the screenshot above).

So that concludes this list of 5 Best Free Android Apps for Remote Desktop Access. I have tried to include all the big names that I thought were compelling, but do keep in mind that the responsiveness of these is highly dependent on your Connection Speed, Desktop Screen Resolution, Processor, and other such factors. And do you see the comments section below? Yep, they are just meant for any suggestions that you might have!