Giphy Cam is a free Android app to record videos as animated GIFs. The best part of this app is that it is developed by one of the world’s best GIF service “Giphy“. Using this app, you can easily record a video and save it as animated GIF. Apart from that, you can also capture an image burst which will automatically merge into a single animated GIF. To make the GIFs more hilarious, you can also add different animated frames, stickers, funny FX, video effects, and more. Currently, it offers 9 filters, 10 stickers, 8 animated clay faces, 13 animated accessories filters, 11 magical animated backgrounds, 18 overlays, and 14 animated frames which you can apply to your GIFs. In addition to that, it also lets you add meme text on GIFs and choose from 9 different text fonts. One moe thing, you can either apply the animated filters live on the camera before capturing a GIF or you can add them after capturing it.

Apart from letting you explore and share tons of hilarious GIFs, Giphy has been developing various tools like GIF Editor, GIF Maker, etc. to assist all the GIF lovers in getting their favorite GIFs in any way they want. Now, they have come up with this interesting app to help the Android (and iPhone) users record GIFs with animated effects right on their phone and with ease.

Note: The “Giphy Cam” app is now also available for iPhone, but I have only reviewed the Android version of this app.

How to Record Videos as Animated GIFs on Android: 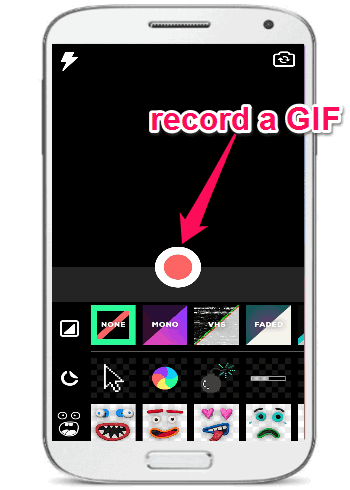 Step 2: At the bottom of the built-in camera, you’ll also be able to see all the animated filters, frames, effects, etc. As mentioned, you can either apply them live on the camera before capturing a GIF or add them later when GIF recording complete. The animated and non-animated (filters and meme text) items which you can apply to your GIFs are categorized into Filters, Stickers, Clay Faces, Accessories, Magic Wand, Overlays, Frames, and Text Tool. 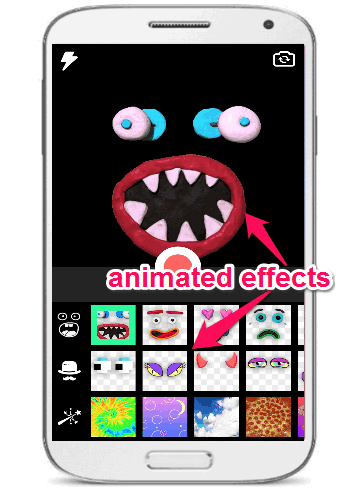 You can add any of these items with just a tap, and to remove them all you got to do is shake your phone and the item will be removed from the GIF instantly. It also lets you set the GIF playback as Ping Pong, Backward, and Forward by tapping on the “Repeat Arrow” icon at the top-left corner.

Step 3: When you’re done recording a GIF, you can either save it as an animated GIF or as a video on your phone gallery. You can also directly share it via Messenger, Twitter, Instagram, etc. 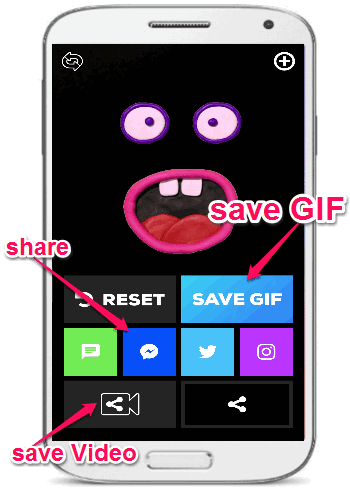 If you’re looking for a simple GIF app to record GIFs with dozens of animated effects, then you can go ahead and start using Giphy Cam for Android by Giphy. Personally, I like this app as it lets you add the animated effects live on the camera before capturing a video or an image burst.

Get “Giphy Cam” from here.