Burning photos, videos and files on optical media like CDs, DVDs and Blu-Rays is a great way of making sure that they are not lost in accidental deletion from the PCs hard drive and also it’s a great way of making them available for reproduction on various media players. Cyberlink Power2Go 8 Essential is a media burning software which can burn data on all of the previously mentioned optical media types, and on top of all that it’s free. 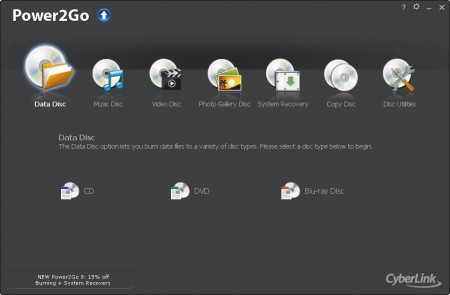 Before we begin with the presentation of this free Blu-Ray burning application, I think that warning is in order. Power2Go 8 is around 380 MBs worth of download and it might be a little bit too much for those who are limited by slow internet connection or for those who have bandwidth limitations. Software is also relatively bulky, but surprisingly light on resources, so if you have an older PC with slower connection, you might want to look into some of the other free burning software available out there. 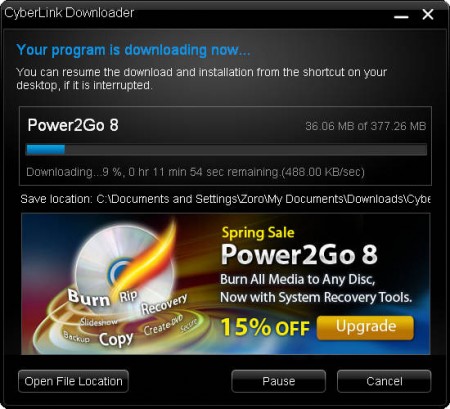 After first run you’ll discover that Power2Go media burning software actually comes with 15 days test period of the Pro version, after which the features are downgraded and you’re left with the Essential version. Let’s have a look at what exactly Power2Go 8 Essential has to offer.

As you can see from the image above, user interface is very modern looking and it has a slick design. Types of media that can be burned to either DVDs, CDs or Blu-Rays is divided up into neat categories and you just need to hover over a category in order for the subcategories to be revealed.

What kind of disc types can Power2Go burn?

This burning software supports all the disc types that a normal user needs, and even more. 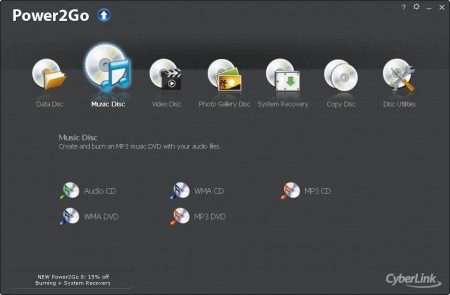 Back up your favorite music CDs, copy, and more

Power2Go offers you a lot more than just the basic disc burning, tools for music CD backups (ripping), re-writable disc erasing and audio conversion are also included. If you have disc images which you would like to mount, you can do that with Power2Go burning software, under Disc Utilities just select Virtual Drive, create a virtual drive in which you can open all the popular image file formats like .ISO. Disc to disc copy is also available, if you have two DVD-RW combo drives in your PC, or at least a reader and a burner.

Hardware failure is something that looms over all of us, and it’s always a good idea to have a back up of the system, files to be more precise. With Power2Go, you can easily backup your filesystem by simply clicking on the System Recovery tab and selecting Burn system recovery disc, which will mark for burning all of the important system files, and all the data that you currently have residing on your PC. That’s pretty much it, if the program size is a bit smaller it would be better, but even with this drawback Power2Go is a great burning software which should be in the arsenal of every fan of disc burning.