Cube is a Google maps combined with Labyrinth game; that you can play on your Chrome browser for free. You just have to direct a small ball to reach some checkpoints in 3D locations.

Cube is a game developed by Google itself. You will play on a giant and obviously six faced Cube platform; to direct a tiny ball in some locations to desired destinations. The game is just for fun and doesn’t take much time to finish. Add this Google Chrome extension and play Cube anytime you want to. 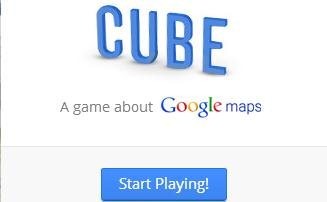 About This Labyrinth Game Cube:

Everyone has a common notion that cube means you direct the ball through some complicated ways and drive it out of the cube. But this game is not like that. Imagine real 3D map locations are embedded on the faces of the cube. You have to tilt the cube, just like the Labyrinth game and direct the tiny ball. You just have to move the marker around to tilt the giant cube and reach the destinations in shortest time; and all of them are real life locations. The maps that are included in this game are: New York, London, Tokyo, and few other locations.

This labyrinth game might sound very basic but Google gave a spicy touch to this game. There are buildings in between, traffic, bridges, obstacles, etc. Sometimes you have to face roads that slow you down, maps re arranging themselves in between, and much more. This game is developed in HTML5 environment; which gives it a lively look.

As you can see in the below screenshot, the blue color tiny ball and it is moving towards the blue colored arrow. The dark pink colored bubble is the destination and you can also observe that some of the buildings are modeled in 3D. Sometimes there are multiple locations also; which you have to visit. 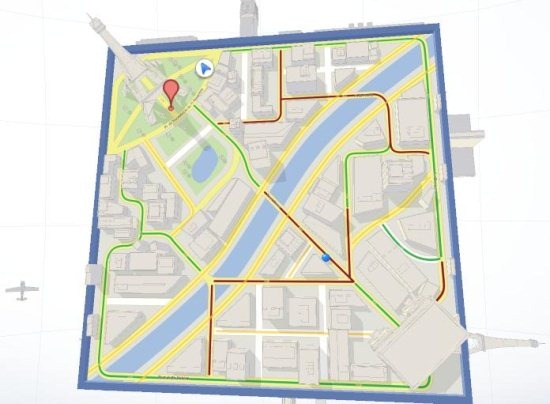 As I said, the game is short but if you would like to compete against the best time, it is 2:45. It took seven minutes for me to play for the first time and I clearly knew that if I compete for the best time, I’m going to fall into the trap of Google Maps (just kidding). Though the cube has only six faces, there are eight levels to complete and it get’s worse when you go to higher levels. You just have to use your mouse to tilt the cube and drive the ball.

Watch this amazing video of the gameplay of Cube labyrinth game.

This labyrinth game is really addictive. The graphics are too good and music is soothing; and classical. You can also try other mash ups of Google maps: Rail radar to locate Indian Trains and Hotel finder.