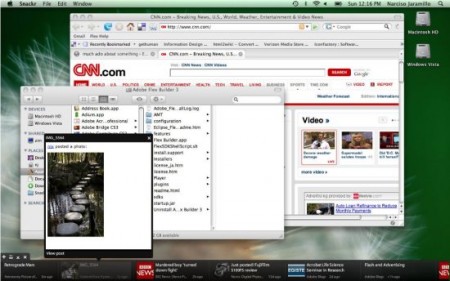 If you want to transfer all your feeds from normal feed reader then don’t worry as you will be able to do at as this free multi-platform RSS ticker supports exporting OPML files. Narciso Jaramillo is the one who built this free RSS software. He used to work as an Adobe developer and now he is working on the Flex product line. But if you are thinking about replacing your existing reader with it, you are wrong. You can think of this free RSS ticker as an extension to your existing reader.

This attractive RSS ticker comes with an attractive and easy to use interface. You will find four buttons on the tab. One is for adding feed, second one is for option, third one is for expanding or collapsing a feed and the last the fourth one is quit. I guess you won’t have to use the fourth one once you start using this ticker. The current official version doesn’t support integration with Google Reader but there is a test build version which supports integration with Google reader. There is a built-in auto update feature in Snackr which will let you know whenever there is a new version of Snackr is available. You might see that this free RSS ticker sometimes load the whole website in the bubble. It happens when the ticker fails to find any content or description. The developers of Snackr are working on it and are trying to improve this feature.

If you are looking for free RSS reader, you can try RSSOwl, RSS Xpress and Feedlooks reviewed by us.