Cyberlink BD & 3D Advisor is a small utility whose main purpose in life is to test PCs in order to see if they are capable of playing Blu-Ray video quality and if the monitor can display 3D image properly. This is not an advanced application, it’s very simple and pretty much straightforward. 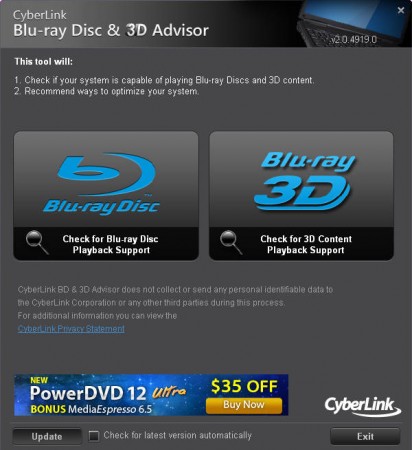 Image that you see above is the window which will greet you when you start-up Blu-ray Disk & 3D Advisor, or BD & 3D Advisor for short. Application is free, made by Cyberlink, but as you can see advertisement is present at the bottom of the application window, and during installation you are offered to install Google Chrome, make sure to uncheck these options if you’re not interested in installing them.

Test is started by clicking on the Blu-Ray button, it’s the one on the left and after you press it, a small pop-up window will appear where percentage of the scan completion is shown. Test doesn’t take long, a few minutes tops, and when the test is finished, keep your fingers crossed that you don’t see something like this:

Results for my PC do not look promising at all, my CPU is not powerful enough in order to run high-definition content, which is very demanding on the resources.

Test is started the same way that the Blu-Ray test is started, and at the end you are presented with the same type of report. The program here tests hardware, and also it checks to see if your monitor supports 3D display. My computer failed here as well, even though I have a decent 21.5″ monitor, it doesn’t support 3D image and I failed the test. 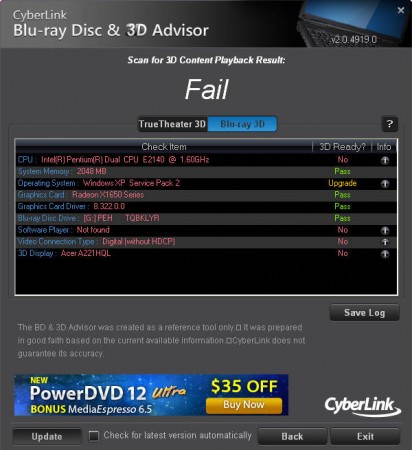 Notice small exclamation marks next to results, clicking on them will show you suggestions on what you need to do in order to make your PC more Blu-Ray and 3D friendly.

You can also check out free drive emulators to create virtual Blu-Ray drive on your computer.

Majority of us have older computers which might not have dual core CPUs, advanced graphic cards and so on, but what we have is more than enough in order to do everyday tasks like writing texts, browsing the Internet and sending/receiving emails.

Sometimes we are tempted to try all the new and interesting things that are being advertised and 3D Blu-Rays is definitely one of those things that are tempting. HD video quality can be breathtaking, and owners of PC configurations who are not sure if their machine is able to run HD content, who’s specs are somewhere very close to being able to run HD content can use Blu-Ray and 3D Advisor in order to check and make sure what exactly is possible to run on their PCs.

You will also receive advice on what you need to change, upgrade in order to make your PC a little bit more high-definition friendly. I’m for example off to find a better, faster CPU, which probably allows me to run Blu-Rays without twitching. As for the 3D, I’m gonna need a new monitor, which supports 3D.