This tutorial explains how to remove all taskbar pinned items together in Windows 10. You will be able to remove taskbar icons of pre-installed applications like File Explorer, Microsoft Edge as well as icons of programs pinned by you manually. This may come in handy when you have dozens of icons on taskbar and you want to clean all of them at once.

To remove all taskbar pinned items in one shot in Windows 10, you need a very simple tool. It is named as “PinClean” and its name gives some hint about it. The tool is actually a BAT file which helps you in cleaning your Windows 10 taskbar.

In the recording added above, you can see that earlier there were multiple items pinned to my Windows 10 taskbar. Later, all those items were removed automatically. Neither opened applications are closed nor their icons are corrupted. Just pinned items are removed from taskbar.

Note: This tool works great but it failed to remove Mail app icon from the taskbar. I’m not sure if it was because of some process running in the background or it just can’t remove that item. Also, before using this tool, you should also take a backup of your Taskbar items. This will be helpful if anything goes wrong, you can easily restore all taskbar pinned items.

How To Remove All Taskbar Pinned Items Together in Windows 10?

Step 1: Download the zip file of this PinClean software and then extract it.

Step 2: The extracted folder has three different files. You need to run “runme.bat” file. You should run it as an administrator by right-clicking on that file and using the available option. 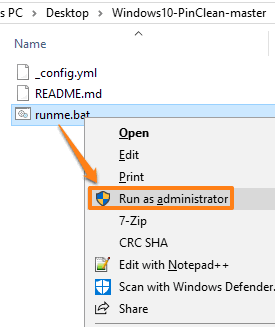 That’s it! The BAT file will do its work automatically. It will remove all pinned items from taskbar and restart File Explorer. After that, you will notice that taskbar is cleaned from all the pinned items.

Did you know you can also separate pinned and unpinned taskbar items in Windows 10?

Unpinning programs from taskbar is not an issue and it can be done easily. But, when there are so many taskbar items and you want to remove all of them with an easier way, then this tool is gonna help you. Just two mouse clicks will clean the taskbar.