Here are 5 free online YouTube DJ mixer to mix YouTube music like DJ. Using these online DJ mixers, you will be able to mix two different YouTube music with basic DJing tools, like: Cue, Loop, Crossfader, etc. You can simply open up these YouTube DJ mixers and then choose two videos from YouTube of your choice. After that, you can play the videos simultaneously and use the controls on the built-in DJ mixer to add cue (start point of playback), loop (repeat specific section), crossfade (the playback of tracks), control volume of each deck, and so on.

Some of these YouTube DJ mixers also come with a few unique features like auto crossfading, BPM control, SoundCloud support, etc. Unlike other core online DJ mixer or DJ software, these 3 websites are specifically made to mix YouTube music. The best part about these YouTube DJ mixers is that they are very intuitive and you don’t need to be an experienced DJ to mix YouTube music. 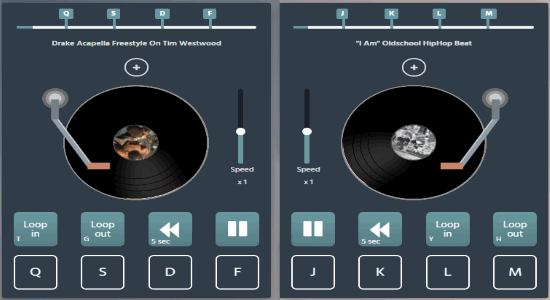 Youtube DJ is no doubt one of the best free online YouTube DJ mixer which can help you easily mix YouTube music like a professional DJ. It allows you to directly search YouTube videos on the DJ mixer and then add two of them on the decks. After that, you can play the videos as musical tracks and start DJing at the same time. It lets you add cues, set loop, adjust volume, and most importantly crossfade the tracks. It also comes with a unique feature which allows you to control the speed of the playback for both decks separately.

Step 1: To get started, visit the homepage of “Youtube DJ” and there you will see one deck on the left and the other deck on the right. Apart from that, you will also see a crossfader section in between the decks. Now, what you need to do is search and add YouTube videos to the decks. 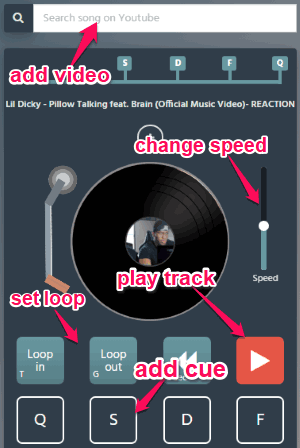 Step 2: For this, type the name of the video in the search bar at the top of any deck and then click on it. As soon as you do that, the video will be added as a musical track to the deck. Similarly, you can add another video to the other deck. When you’re done adding a YouTube video to any deck, you will be able to do the following things on that particular deck:

The above steps can be performed on both the decks individually after adding YouTube music to them.

Step 3: Once you’re done with all the settings on both the decks, you can mix both the music tracks by playing them on the decks simultaneously. If you want to enhance the quality of the playback, then you can move to the “Crossfader” section and adjust the crossfading intensity of the tracks. You can adjust crossfade by dragging the slider in two different modes, named “Cut” and “Man”. Apart from that, you will also be able to change the volume of the decks individually, as shown below. 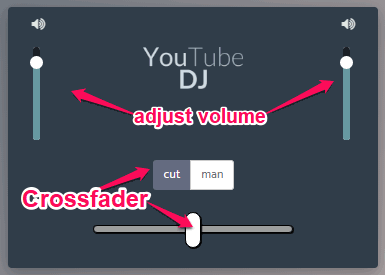 YouDJ is another amazing online YouTube DJ mixer which you can use to mix YouTube music with ease. Similar to “Youtube DJ”, this one also lets you to directly search for YouTube music on its website and then add them to the decks. Apart from letting you add YouTube music, this one also allows you to search “SoundCloud” for music tracks and use them for DJing. The free version of YouDJ allows you to set loop, crossfade tracks, change the volume of decks individually, etc. It also comes with unique features like audio effects, BPM control, etc. If you would like to use some other additional features like Cue, Wave, Jump, and 16 more effects, then you would need to purchase the PRO version of YouDJ.

Step 1: First, go to the homepage of “YouDJ” and there you will see two different decks along with a “Crossfader” section. At the bottom of the left deck, there will be a search bar using which you can search for YouTube music and add them to the decks. To add a music track, simply select the “Search on YouTube” option and then type the name of the music track in the search bar. 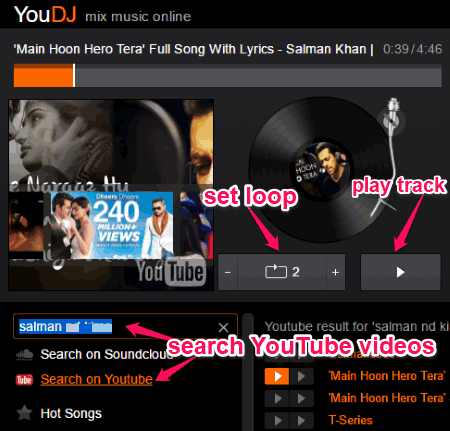 Step 2: Once the result appears, you can either add the video to the left deck or right deck. It also lets you search for music tracks on SoundCloud and then use them on the decks for mixing. You can even use and mix your own music tracks from your PC, but you would need the desktop client of YouDJ for that. When you have added a music track to any  of the decks, you will be able to play it instantly and also set loop for 0.5, 1, 2, 4, 8, 16, or 32  seconds. The audio effects can only be used if you choose music tracks from SoundCloud, which means YouTube videos are not supported for using audio effects.

Step 3: In the same manner, you can add a YouTube video to the other deck and then play it simultaneously with the previous track to mix them. In between both the decks, you will see the “Crossfader” section, where you can adjust the crossfade of the added tracks by dragging the slider manually. In addition to that, it supports auto crossfading and you can click on the “Arrow” icons associated with the slider to activate auto crossfading. There, you will also see the options to change the volume of the decks individually and adjust the BPM of the playback. 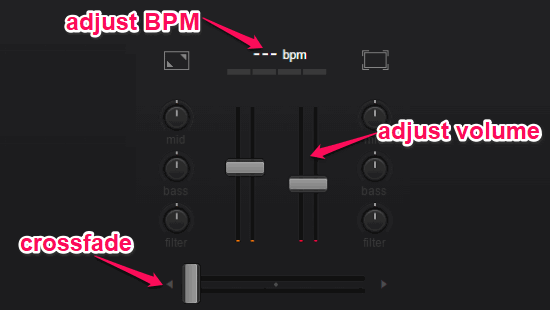 On the “Crossfade” section, you will also see tuners for mid, bass, and filter, but you can only use them for SoundCloud music tracks, similar to the audio effects.

YouTube Mixer can also be used to easily mix YouTube music. Unlike “Youtube DJ” and “YouDJ”, this online YouTube DJ mixer looks pretty old with no DJ turntable. But it still serves the purpose and allows you to mix music from YouTube. You can choose any two YouTube videos and add them to separate decks. After that, you can play them at the same time to mix the tracks. You can also add cues, set loop, adjust crossfade, and change volume of the decks.

Step 1: After you browse the “YouTube Mixer” homepage, simply scroll down and select the “Search” tab. After that, you can type the name of the YouTube videos which you want to use in the search bar and hit Enter. Then, you will see the option to add the video to either deck 1 or deck 2, as shown below.

Step 2: In the same manner, you can search for any YouTube music videos and add them to both the decks. After adding a video to any of the decks, you will be able to set “Loop In”, “Loop Out”, and add cues by selecting the “Back to Start” and “Back to In”. Then, you can play the video by clicking the “Play” button at the bottom of the deck. Similarly, you can do the same for the other deck. 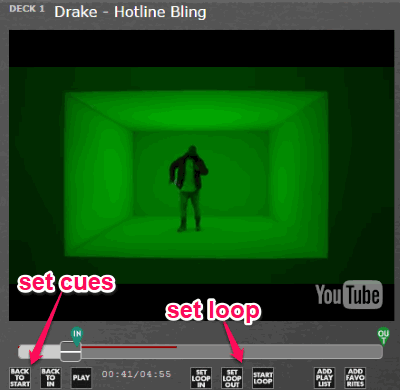 Step 3: In the area between both the decks, you will see the option to apply crossfade by clicking on the horizontal “Backward” and “Forward” arrows. It doesn’t actually have the option to manually control the crossfade, which means when you click on the arrow icons, it will activate auto crossfading. There, you will also see vertical arrows, which you can use to control the volume of the decks individually. 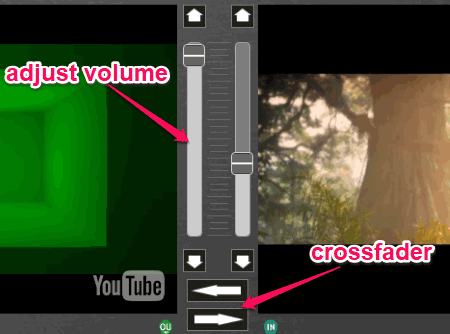 DJ Tube is another very cool online DJ mixer for YouTube that you can use. It allows you to import two videos from YouTube and then allows you to mix them in the way you want. It offers cross fading that lets you control the playback and you can switch to other song pretty quickly. You can add any two songs from YouTube in any of the decks quickly an play them.

The YouTube integration this website has is quite amazing. You can easily search any song directly from YouTube without leaving the current tab and then simply drag it in one of the decks. There are two decks on the main interface and thus you can only play two songs at a time. Best part is that you don’t have to sign up in order to use this YT mixer. 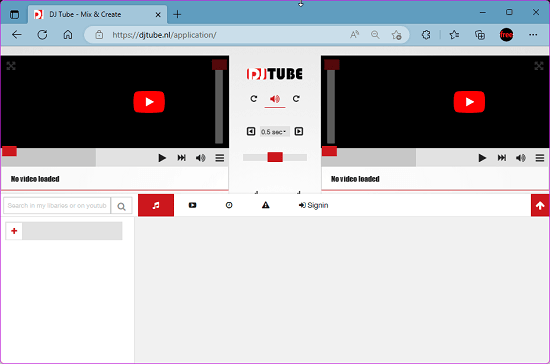 After you reach the main website, you simply need to search for song in the YouTube section. It will display some results as shown in the screenshot below. 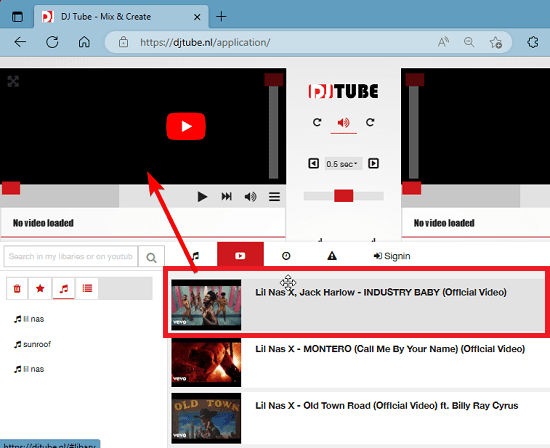 You just drag a song from the search results to one of the decks. Similarly, you search for the second song and then drag it into the other deck. 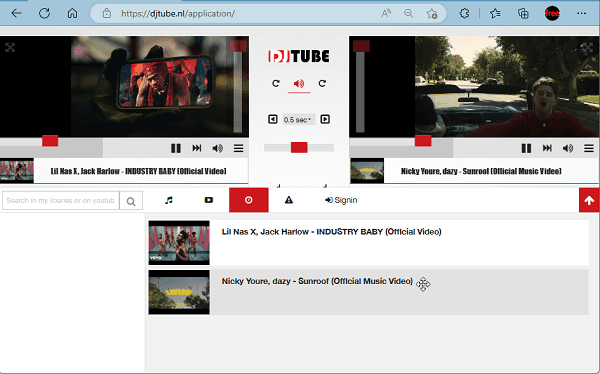 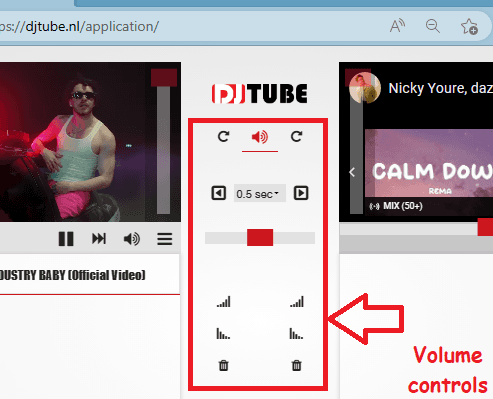 In this way, you can use this simple and useful YouTube mixer to mix and play songs from YouTube for free. You can use in your home, parties, and at other occasions.

RaveDJ is another free website that allows you mix and play YouTube tracks with ease. Good thing about this website is that apart from YouTube, it supports Spotify as well. And not just two songs but here you can add as many songs in your list and it will mix then for you. However, you can only play them on the website as it will not let you download the final mixed video songs.

Signing up for an account is not really required on RaveDJ. Just reach main homepage and start using it right away. All you have to do is just search for a song and then add it to the mixed list. Apart from using a single song, it even lest you create YouTube mix using YouTube playlists as well. To add a YouTube playlist, you just need to enter its URL and it will fetch it for you.

Now, after adding songs that you want mix click the “Create Mashup” button. It will now start processing your video and will take some time. Depending on what kind of mashup you have opted for, it will take time. When it done, it will generate your mixed video songs. You can copy the link and then play it whenever you want to. or, you can also send it to anybody if you like. These are some of the best free YouTube DJ mixer which can assist you to mix your favorite YouTube music online. Personally, I like “Youtube DJ”, as it is very intuitive and can be used even by newbies to mix music tracks with ease. The options to change the speed of music tracks and add cues also make it pretty useful and unique.

Try them out and do let us know if you’re familiar with other similar online tools.