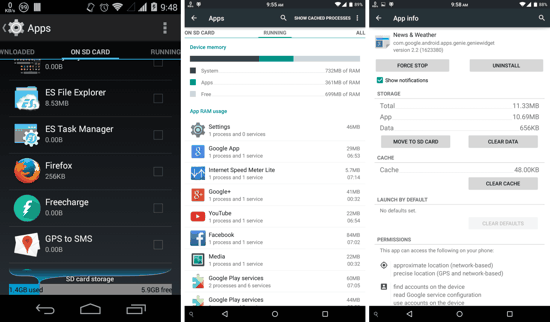 This one was a no-brainer, and takes the crown without any competition from the third-party alternatives. If you didn’t know, the default Settings menu of your Android device also has a task manager. To open it, you need to go to Settings -> Apps-> Swipe right to Running apps. Here you will be able to see all the running apps that are currently consuming the RAM on your Android device. To Stop any process from running, you just need to tap on it, and then tap ‘Force Stop’ on the next screen. Just so that you know, in most normal usage scenarios, you don’t need any third-party task managers for Android, and the default one discussed here is enough to get the ‘task’ done. 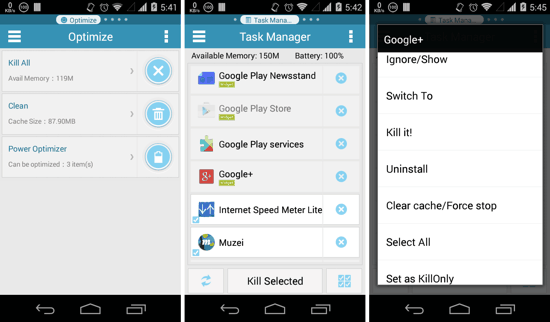 ES Task Manager is one of the simplest ones out there, and gets the job done without any fuss whatsoever. It shows you three options on the main Optimize screen — Kill All, Clean, and Power Optimizer. Open up Kill All, and you will be taken to the task list. Here you can see all the running apps, which you can kill individually, or all at once. Touch-n-hold on any app, and you will see additional options for it. As can be seen in the first screenshot above, ES Task Manager also has Cache Cleaner, and Power optimizer (which has various System Power controls). 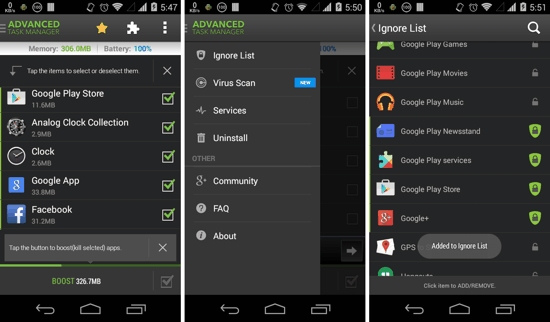 Advanced Task Manager is another great app for managing your running tasks. It is a fairly popular app, and can kill your tasks with a single click when you tap on the ‘Boost‘ button at the bottom of your screen. Slide out the sidebar from left, and you can manage your Ignore list. The Ignore list has those apps which you don’t want Advanced Task Manager to kill every time that you tap on the ‘Boost’ button. You can also open the System Task Manager of Android by tapping on Services in the sidebar drawer. 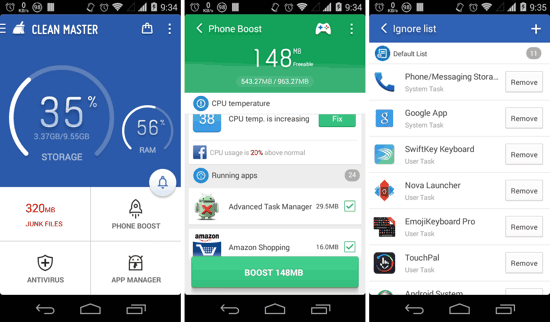 Clean Master is among the most popular Cache Cleaner and task manager apps for Android. It is more advanced Task Manager as compared to others in the list. It has a RAM Manager which can be accessed right from  the main screen, and has other features which, the developer claims, can give you a lag-free experience. There are several analyzers within the app which can help you identify and keep an eye on the resource intensive apps. Increase in CPU temperature is detected as well, and the app then prompts you to kill the culprit apps, i.e. the ones that are consuming most RAM, or restarting frequently in the background. Clean Master is available for free on the Play Store, but is ad-supported. 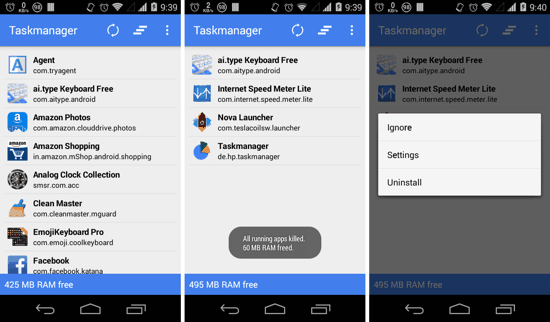 Taskmanager, as the name suggests, is the neatest and simplest Task Manager for Android. It just features a list of all the running apps on the main screen. You can choose to clear all in one click, or close each of the unwanted ones individually. You can add apps to the ignore list as well. Not to forget that the app features material design, and hence looks pretty!

That’s it guys, you have reached the end of this list of 5 Best Task Managers for Android. Any other apps you might know of? Come on! Enlighten the common folks in the comments section below.