Mario Jump is a very cute game for Android in which you have to help Mario get to his Princess. You have to tilt your Android phone to make Mario jump on floating sticks that lead to the castle in the sky. Some of these sticks move from right to left, some disappear, and some have springs on them to help Mario jump higher. You also have to collect coins in the process.

This free Super Jumper Game app is very exciting to play. The level of difficulty increases as Mario goes up. You have to avoid flying birds that can kill Mario. Mario gets only one life in this game, so if he dies you have to start over the game.

Features Of this Mario Game for Android:

You can also play Mario parody Version 2, a free Android game reviewed earlier on our website. 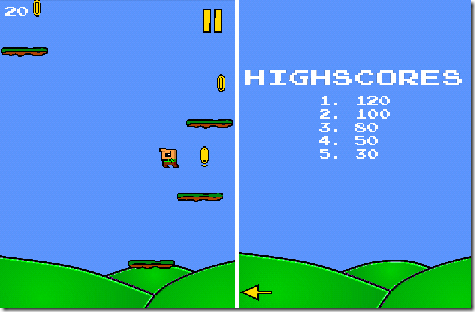 You can download this Mario game for Android using the link or QR Code that is given at the end of the page. Once Mario Jump is downloaded, it will take around a minute to get installed on your Android phone. Open the game app by clicking on its icon. Now, click on start and close the advertisement that appeared on the screen of your Android phone. No more ads will appear, so you can play the game non stop. To get to know the rules, tap on Help.

Let Super Jumper Mario get to his beloved Princess by taking him to the castle that lies in the sky. There is only one way to reach the castle, i.e. by jumping on sticks that are placed in a way to form a distorted ladder. Some of these sticks even float and so it is necessary that Mario does not miss them while jumping up. You can jump on springs to jump even higher. Some sticks may even disappear as soon as Mario jumps off them. Whatever happens, remember not to fall or the game will be over.

There is only this single level in the game but it is not as simple as it sounds. The difficulty level increases as Mario starts reaching up and closer to the castle. Flying birds and other creatures can harm you and even take Mario’s life. You have to avoid these creatures to reach to the princess in the castle safely. Also, remember to collect coins in the process. They may help you in bribing the guards of the castle if Mario ever reaches there.

You can also play this exciting free game: Mario Amazing Jump for PC.

Mario Jump is a very addictive and cute game. You just have to tilt your Android phone to make Mario jump higher and higher till he reaches the castle where his princess lives. The game is very much like Doodle Jump which I loved way more than this game. But anyways, you can give it a try.

Scan the QR Code given below to Get the app directly on your phone.