Mario Parody Version 2 is a  free Mario game for Android. This is a fantastic game app for all Mario game lovers. Now, you can play one of your favorite childhood games on your Android device  anywhere and anytime. Yes, you read it right. The new avatar for Mario in this game will surely surprise you.

This Mario Game for Android is even more exciting and fun to play, than another Mario game we covered earlier. If you are a die hard Mario fan and have already been playing Mario online, or on your PC, then now you can carry Mario around in your Android phone as well with this Mario app.

The goal in this game is to take the brave Mario to his princess. In the process you will have to face many obstacles in the form of cute cats, angry birds, turtles, and spiders. Collect coins, stars, candies, and use fire to kill the poisonous creatures. 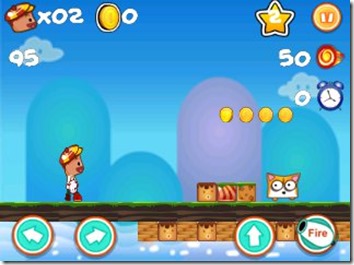 Some Features of this Mario Game for Android:

Download the app using the QR code given at the end of the review. Now, launch the app by tapping its icon on your Android phone. You will see six options: Play, Introduce, Sound, High Score, Buy Item, Collect Item. 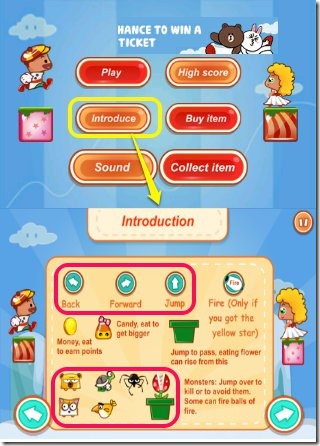 You can first see the Introduction to get an idea of this new game of Mario. The goal is the same: to get to the wide-eyed princess. When you are ready, go to the main screen and press Play.

To play the game you have to use Back (to go left), Forward (to go right) and Jump buttons available on the screen itself. You have to collect all the money that you see to earn points in this Mario game for Android. You will have to jump over wooden stacks to collect valuable objects. Collect all Yellow stars to get fire power which you can use to kill poisonous creatures. Each game will have three Mario lives, and so after 3 lives you will have to restart the game.

Obstacles: You will have to face a lot of obstacles like poisonous plants and animals. These can be cute looking creatures like cats, angry bird, and turtles. You can even face spiders, dogs and man-eating plants. Mario can die if he touches any of these dangerous objects or animals body. However, there is a way that you can kill them. To kill an animal or poisonous plant, you can jump over its head. Some of them may not die like this. So you can use fire to kill them. You will get fire power when you collect Yellow stars.

You can also play this amazing Monster Fight game for Android, reviewed earlier on our website.

This Mario game is not only fun but interesting too. It has amazing graphics that will surely catch your interest. but there are a lot of obstacles in between. Play the game to help Mario get to his Princess and have unlimited fun  unlocking more and more levels.

My Verdict on this Mario Game for Android:

Mario Parody Version 2 is an amazing Android app for all the lovers of Mario game. This app is sure to bring all your childhood memories alive. The best thing about it is that it has new characters..or you could say the same characters but in a better and modern avatar.

Scan the QR Code to download the app directly on your Android device.