Windows has a feature that it automatically checks when any system file is missing, and replaces the missing file as well. It doesn’t require any intervention. However, even after this feature, sometimes the system files get corrupted and are not fixed. Even Windows sometimes fails to detect such problems.

To take care of this problem, you can manually scan the system files with System File checker (sfc) to detect and fix the problem. It scans thousands of system files. It compares original files of Windows and updated files by Windows, and replaces the file if any error or mismatch is found with the original ones.

To scan system files in Windows 8, follow the instructions given below:

Step 1: Open “Search” by pressing Windows key + S. Type CMD in the search box. From the results, right click on the Command Prompt and select “Run as administrator”. 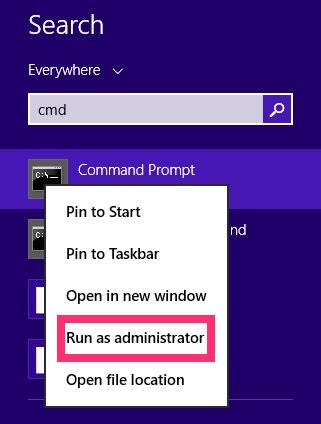 Step 2: In the Command Prompt, type sfc followed by space and /scannow, as shown in below code:.

This command will scan all the system files. It will take around 10-20 minutes. At the end, it will tell you if any error found, fixed, or not.

The above command will give four possible messages:

If you have received the first message then you don’t have any missing or corrupted files.

However, if you have received 2nd, 3rd, or 4th method then you need to dig further. You can find details of all these messages as well as what to do here.

If you want to scan a specific file only, then type sfc followed by space /SCANFILE=<file>, as shown below:

Replace <file> with the name of the file you want to scan. It will try to repair the file as well.

Here is an example of complete command file a file name:

If you don’t want to repair file and only want to verify, then use following code:

To verify all files, use following code:

Step 3: You can even schedule the System File Checker to scan the files, next time you start your Windows 8 PC. To do so, copy and paste the below mentioned code:

However, if you want to schedule System File Checker to run everytime you start your Windows 8 PC, type the below mentioned code:

If you want your System File Checker to revert back to the default settings, use this command:

Schedule System File Checker as per your preference to check for missing and corrupted system files.