Exch is a free software to see currency exchange rate in command prompt. This software allows you to see the latest currency exchange rate of any currency right from the Windows command prompt. And not only that, you can also convert currency easily to any other currency. Exch is a simple tool to always keep track of the currency rates. There are very simple commands in it that you can use to easily see latest rates for any currency. And since it is a command line tool, so you can make a batch file and see rates of multiple currencies at once.

There are many software and even some Android applications to see and convert currency rates. And if you like command line stuff a lot, then you will like this tool that I have mentioned below. With just a simple command, you will see the currency rate and you can also convert that to other currencies easily. 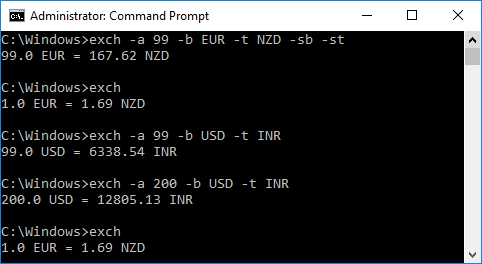 How to See Currency Exchange Rate in Command Prompt and Convert Currency?

Exch requires Python to be installed on your PC and after installing it, you can access it from anywhere. Also, you can even use this tool as a back-end to some of your application if you have some knowledge of programming.

Here are the steps to see currency exchange rate in command prompt.

Step 1: Open an administrator command prompt and then type this command to install this.

Step 3: Another feature of this tool is to convert currency from one form to another. For converting currency, simply run this command.

This way, you can use this handy tool to always keep track of your favorite currency right from the command prompt. And since this tool is written in Python, it should work on other platforms as well. So, you can easily run this tool on MAC and Linux terminal.