Typing Stats is a Firefox plugin that you can use in order to improve your typing speed. Typing is something that cannon’t be learned, at least not entirely, practice is what’s most important, and the more that you type, the more better you will get at it. What Typing Stats is offering are detailed statistics which you can study to find out what exactly it is that you’re doing wrong, and how you can avoid doing these mistakes and with it improve your typing. 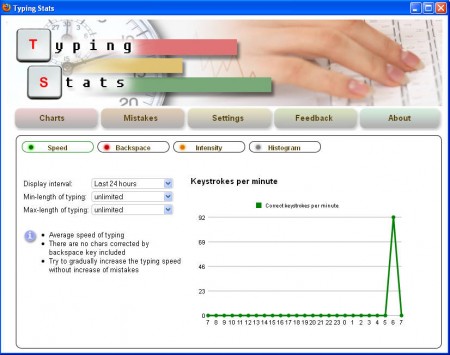 After you install this addon it will appear on the upper right corner of the Firefox toolbar and after clicking on its icon, you will be presented with what you see on the image above. For more serious results of your typing, you will have to use the browser as you normally would with the addon running, so that it can gather information about your typing habits. Do this for at least a few hours, or even less if you type a lot and then you will be able to see various data filled in for all the different options typing characteristics that Typing Stats keeps track of, all that’s left after that is to read them out and see what’s slowing down your typing.

How to monitor typing speed with Typing Stats

There are two main categories where typing speed and quality can be monitored, Charts and Mistakes. We’re gonna deal with Charts first, because they are used to measure how fast you are, not just when it comes to writing, but also how fast you can correct errors, 4 different skills are monitored:

In each one of these you will get a chart, a graph where you will be presented with graphical presentation of your typing habits. 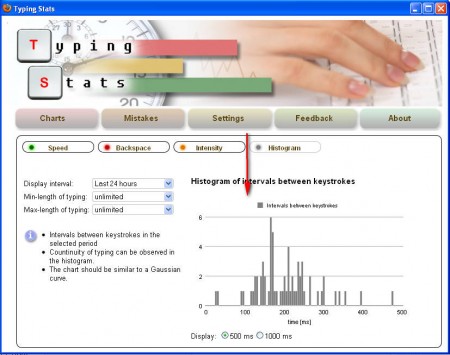 Detect which finger makes the most mistakes

By opening up the Mistakes tab, you can find something really amazing, there’s actually a detailed report on which characters you’re making mistakes the most, and also which fingers are the ones that are most problematic when it comes to missed keys: 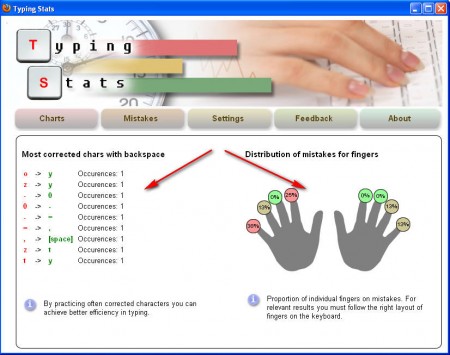 Letters which you were making the mistake on and also letter in which you made corrections can be seen on the left side, and on the right side there’s a “schematic” of your fingers with percentage of correctness being displayed above them. After you find out which fingers are causing you the most problems for your typing, you can start practicing them more, :). Typing Stats addon is a great way of how you can monitor the quality and accuracy of your writting, it should be installed by every person who’s learning how to type faster, especially those who need it for school.