Also, you can view Karnaugh Map solution in Product of Sums (POS) and Sum of Products form (SOP) form, for any Boolean Logical Expression. Along with the solution, you can see the truth table for the number of variables you set for the expression.

Karnaugh Map Minimizer gives you complete freedom to decide where to put the 1s and 0s in the cells of Karnaugh Map. Using the interactive map for the Karnaugh Map you can simply select the box and write either 1, 0, or don’t care value.

Below I have posted a screenshot in which I have shown the solution carried out for a 3 variable Karnaugh Map. I have set the values on Karnaugh Map Cells and then I have viewed the result in SOP (Sum of Products form). 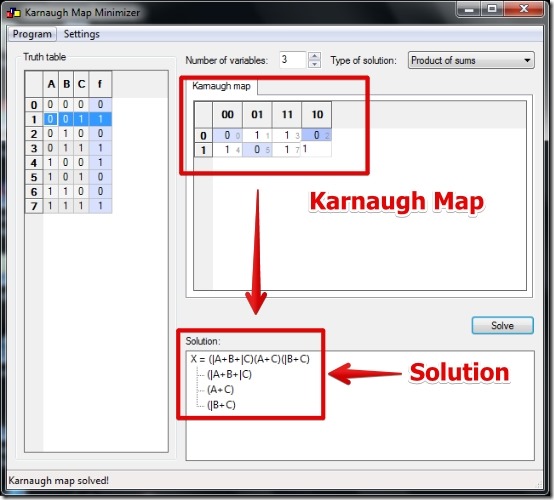 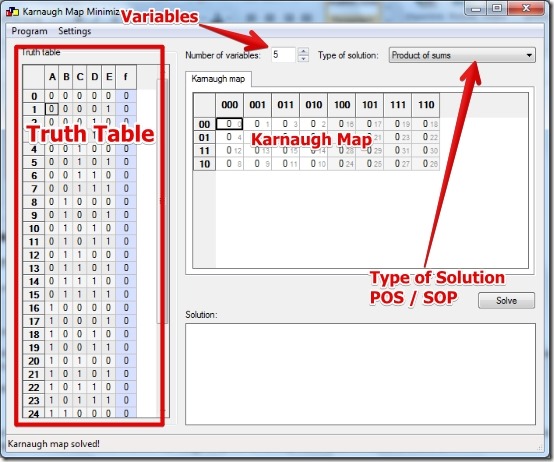 The user interface is pretty simple to understand as you can see above.

In order to solve a Boolean Algebra Expression, just select the variables for the interactive Karnaugh Map from 1 to 8 (depending upon the Boolean Expression). Set the cells of Karnaugh Map to 1 or zero and select Solve. You will have a neat solved expression for the Karnaugh Map.

You can see the result in either of the SOP or POS form.

Note that Karnaugh Map Minimizer is available for Linux also but I have not tested the Linux version.

Karnaugh Map Minimizer is really simple to use and it is amazing for anyone working in field of digital systems, like: students, teachers, and hobbyists. I liked that the solution is also shown along with the final result. The minimization is done very fast and there is support for don’t care conditions also. However, I missed the option to save the result. For that you might have to take the screenshot of the result. Go ahead and try it out.