oShare is a completely free DLNA media server for Windows which is simple, lightweight, and easy to install. Using oShare, you can share media which is present on your Windows computer to other devices via DLNA. Also the interface of this free DLNA media server is quite simple and straightforward. This application is completely open source. oShare supports streaming of photos, videos, and music via DLNA. Basically, everything you would want to stream to other devices is supported by this application.

DLNA media server for Windows are really useful as they allow you to stream media such as video, music, and photos which are stored on your computer to other devices in the network. You can access the media by DLNA media player applications or by DLNA certified hardware devices, such as TV’s. One nice feature about oShare is that it has the ability to stream MKV files. 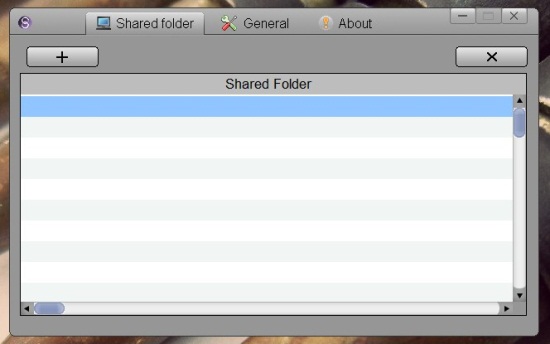 Streaming media to other devices is more sensible than storing same file in different locations. With DLNA, you can store all the media on your Windows PC and then stream it to other devices using a free DLNA software.

How to install oShare on your computer:

The installation of oShare is really simple. Get the application from the link at the end of the article. After you have downloaded oShare to your computer, you will have a zip file with you. Now just  extract files to a folder on your computer and run oShareUI.exe program and you will be presented with the interface of the oShare as seen in the first screenshot of this review.

How to share media with this free DLNA media server:

To start sharing media with other device, you will first need the folders that have media to the server. This can done by launching oShare and then clicking on the add folder button; as pointed out below. This will bring up a window which will allow you to add a folder containing media of your choice. Once added, the media can be played on DLNA compatible devices. This free DLNA media server allows you to add multiple folders. To remove a folder, select it and then click on the remove button. 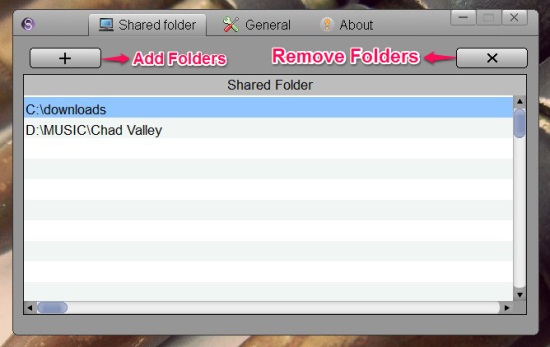 There are a host of applications on different platforms which allow you to access and stream the media on a DLNA server. As an example, I will use a popular DLNA app for Android called Skifta. Launch Skifta and click on the “choose a media source”. This brings up a list of all the DLNA servers which are running on the network; out of those select oShare. Next step would be clicking on “choose a player” and selecting your phone or tablet. Now you will need to go back again to the main window and click on the “browse and play media”. This brings up all the media which is shared, as seen in the 4th screenshot below. In this manner you can use application on other mobiles devices or computer to access the media which is being shared through oShare (or any other DLNA server). 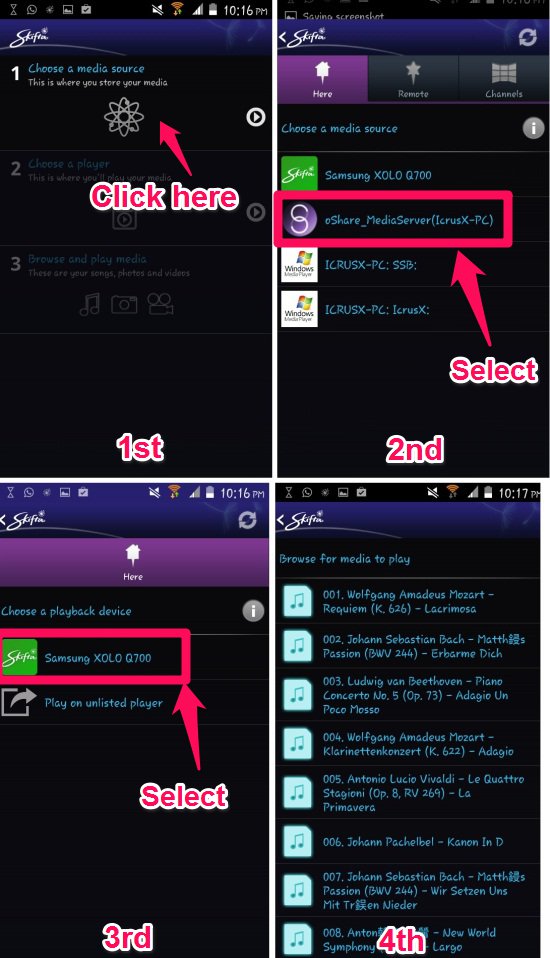 oShare is a great software for streaming media. It does the job without any hiccups. I would like it more if it had nicer looking interface. All in all, this lightweight DLNA media server for Windows is a good application.