KeyTweak is a free keyboard remapping utility, which you can use in order to change which characters will show up in your text editor or any other text input field while you are pressing the keys of your keyboard.

It’s a very small program, only a few MB in size, and remapping keys with it is only a matter of a few simple clicks of a mouse and keyboard of course. 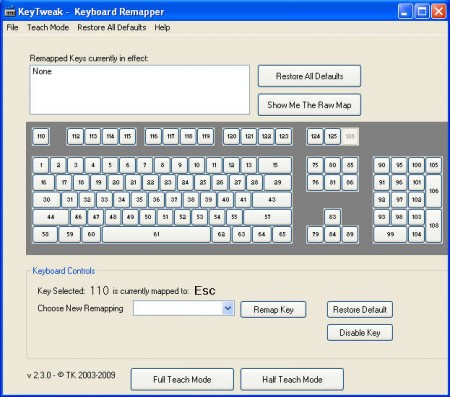 As you can see from the image above the interface of KeyTweak is very easy to follow and understand. Which keys were changed can be easily tracked and if you no longer want to have your keys remapped, then you simply remove all the keys that you’ve changed together or you can remove the remappings one by one. Changing the keys can be very useful for several different reasons, but one that’s most fun would be to prank someone, make them think that they are going crazy. Or, you might be using a particular keyboard since a long time and suddenly move to a keyboard that has some keys placed differently.

To start changing the default characters assigned to keys on your keyboard, open up KeyTweak and you’ll see what you see on the image above. Let’s start familiarizing ourselves with all the ins and outs of the program. 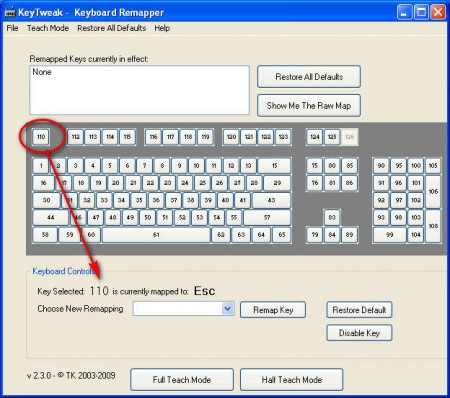 Each one of the keys on the displayed keyboard above has a number assigned to it instead of the keys that they normally have. When you click on a particular key you will see a report at the lower portion of the program window where you will see which character is actually attached to this particular key. In the case of the key above, you can see that the key number 110, which would be the key in the top left corner is assigned to be the Escape key. That’s the key you’d normally find there, let’s change it to something else. 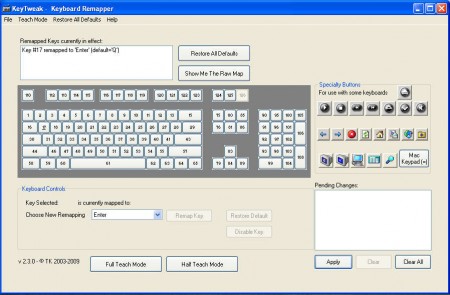 Select that particular key which you want to change and then simply look at the Keyboard Control area at the bottom of the screen. There you will see a drop down menu of all the available characters which you can change for your particular keyboard. From the looks of it, it seems that KeyTweak only uses the default US keyboard layouts, so if you perhaps are using a keyboard which has extra keys for your native language characters, you won’t be able to include those keys in the remapping, or should I say you won’t be able to include those characters. That’s not a great loss, because for what you can use KeyTweak, a few important keys like Insert and Tab are more than enough.

The main place where the remapping of keys can come in handy would be to disable the Insert key, which can cause a lot of problems while typing. If it’s accidentally turned on without you noticing, and you jump somewhere in the middle of the text to correct something, then you could end up replacing the entire text that follows after the location where you made the correction. Other possible use we already mentioned, pranking, in either case, KeyTweak is very helpful and it’s free.

As we saw above, KeyTweak makes it pretty easy to remap keys of keyboard.