This is a quick tutorial to explain how to make Windows 11 Taskbar completely black. To do this, here I will talk about a simple VBS script that you can run on your computer to instantly turn the Taskbar dark black. In addition to the Taskbar, this script will also turn Start menu as dark black. But the best part is that it will not modify the system theme. So, this means, even in light mode, you can have a dark Taskbar on your Windows 11 computer.

Many desktop customization enthusiasts like to have dark colored Windows components. Since Windows 11 does not really have a complete dark mode or Taskbar for that matter, you will have to rely on third party tools. And one of those tools is the script that I have mentioned in this post here. All you have to do is just activate the script and it will automatically turn the Taskbar and start menu as dark black color. How to Make Windows 11 Taskbar Black without Changing System Theme?

You can go ahead and download this script on your computer using this link. Now, after this, you simply need to run it. But in case the windows defender for the antivirus that you are using somehow blocks it then you will have to make an exception.

Now just double click on the script to execute it. It will ask for confirmation dialogue as shown below. Just click ok and then give it a few seconds. It will restart Windows Explorer and in just a few seconds you will have a black colored Taskbar on your desktop. 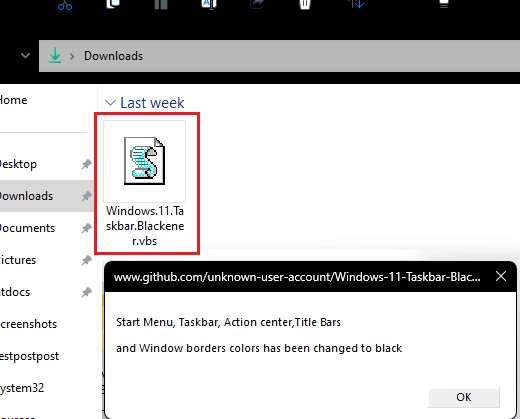 You can see the dark window that it created on my PC in the screenshot below. This is as simple as that. If you are looking for ways to turn the Taskbar of your Windows 11 laptop or PC to black then here is the simple tool for you. Since Windows 11 does not allow users to modify its components, this is the script you will need to turn desktop Taskbar to black. Also, I recently mentioned window theme editor for Win11 that gives you more freedom to modify Windows colors. You can use that software as well to modify certain other aspects of Windows 11, including the Taskbar.

Gamers and Developers usually love black color. And that’s why they want everything black from their code editor to the windows components. If you are one of those and annoyed by the fact that Windows 11 by default does not allow you to set a black Taskbar then here is a simple tool for you which I have mentioned above. Just use it and turn Windows Taskbar and start menu to black in just a single click.