This tutorial explains how to automatically sync Facebook profile pic with Twitter. The method explained in this tutorial will automatically update your Twitter profile picture when you update your profile pic on Facebook. To perform this task, I will use IFTTT web service to create an automated task/recipe that will let you sync your FB display picture with Twitter. The automated task that we will create on IFTTT will monitor your profile picture on Facebook and it will auto sync it to Twitter whenever you will change it. Optionally, you can also set a Tweet message in this method that will be automatically tweeted when your Twitter profile pic is updated from Facebook.

As I mentioned earlier, I will be using IFTTT to perform this task. So, if you are not familiar with IFTTT then you can read its detailed review by us from here. To create the automated task I was talking above, you first need to register yourself on IFTTT and then create a recipe. After logging onto IFTTT, you first need to connect your Facebook and Twitter accounts with IFTTT. To connect these accounts, switch to Channels tab and search for Facebook/Twitter and then click on their icon displayed in results. After that, click on Connect button to integrate Facebook/Twitter account with IFTTT.

After you have connected these accounts, now let’s see the steps to create a recipe that will integrate both of these services and automatically sync Facebook profile pic with Twitter:

Step 1: Switch to “My Recipes tab” and click on “Create a new recipe” button which will pop up the phrase “if this then that”, click on “this” text to continue.

Step 2: Now select Facebook as Trigger channel and “Your profile changes” as the trigger event. 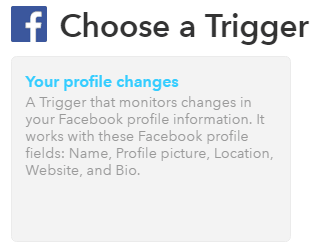 Step 3: In this step, you will select the part of the profile that you want to watch for any changes i.e. Profile Picture, as shown in the screenshot included below. Now, you have configured the Facebook part and click on Create Trigger button to move to the next step. 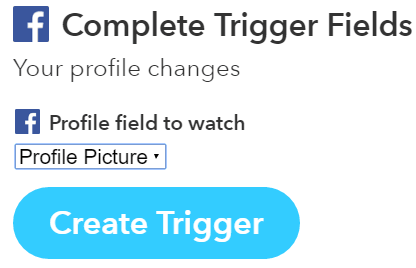 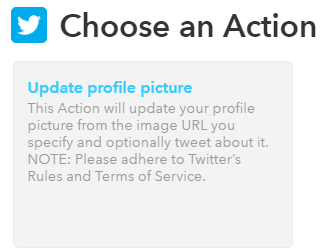 Step 5: In this step, you don’t have to change any default settings but if you wish to tweet a message every time your profile picture is synced with Twitter then you can specify it in the second textbox below “Add a tweet” label. After that, click on Create Action button to complete the process. 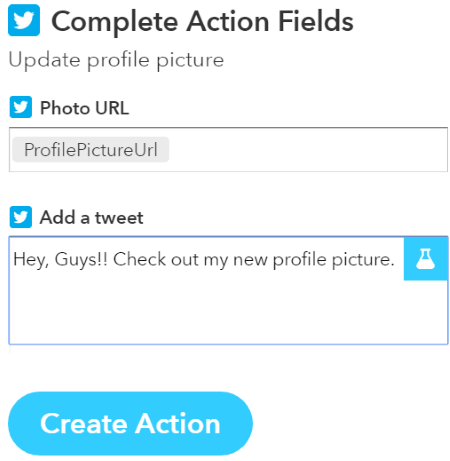 Step 6: In this step, the overview of your Recipe is displayed and you just have to Click on Create a Recipe button to create your recipe/automated task. 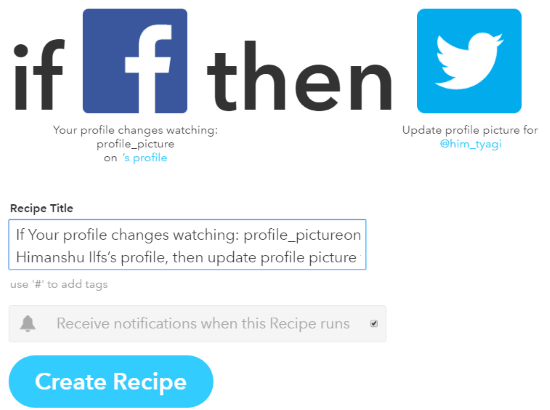