You can simply open up this online tool and then enter the URL of the Twitter list, hashtag, or search in an input field. After that, it will automatically process the URL and generate two different RSS outputs named, “RSS Feed of Tweets” and “RSS Feed of Content in Tweets”. Later on, you can use any of the online RSS feed readers to read the generated RSS feeds or simply embed them on your website. 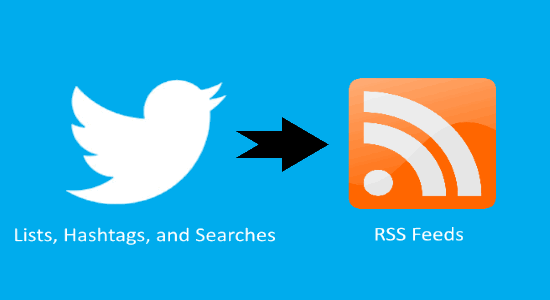 How to Convert Twitter Lists, Hashtags, and Searches Into RSS Feeds:

To get started, open up Twitter and then copy the URL of any list, hashtag, or search. After that, simply visit the homepage of “Twitter RSS Feed Generator” and there you will see an input field at the center of the page. 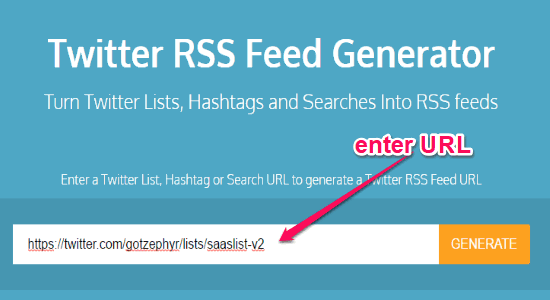 Now, you would need to paste the copied URL in the input field that you want to convert to RSS feed. After entering the URL, simply click on the “Generate” button associated with the input field. As soon as you do that, it will start processing the URL automatically.

Once the URL is completely processed by this online tool, it will generate two different RSS feed URLs, as shown below. One of the URLs is for “RSS Feed of Tweets” and the other for “RSS Feed of Content in Tweets”. 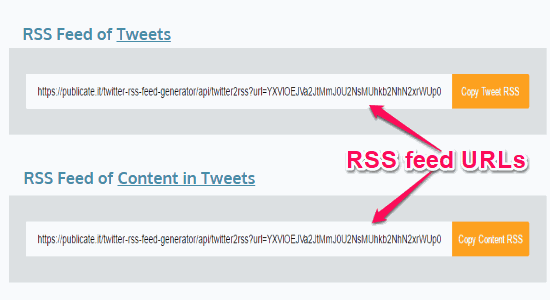 You can now copy the desired RSS feed URL by clicking on the “Copy Tweet RSS” or “Copy Content RSS” button. After copying the RSS feed URLs, you can use them on your website or simply read them using any RSS reader software or online RSS reader.