Here are 5 Free Alarm clock app for Android that let you set alarms on Android phone. You can set wake-up alarm, reminder alarm, and more. 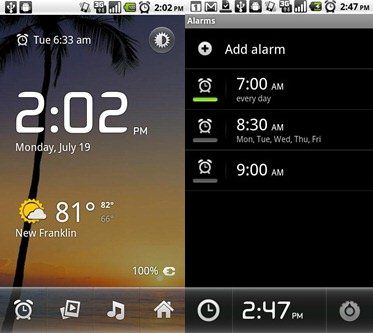 Free alarm clock apps for Android features Alarm Clock Plus in a dominant position. Gaining a physical approach towards alarm clock, it features analog and digital format. Since it is available for free, you can simply download it from Android Market and install it on your phone.

Before using, you need to add Alarm Clock Plus app to the ignore list of task killer else it will cause an error. The special “Voice Command” for Android 2.3+ versions makes it even more convenient for users. Improving previous bugs like default navigator and killing screech voice increase, Alarm Clock Plus gains top-notch in the list of free alarm clock apps for Android. 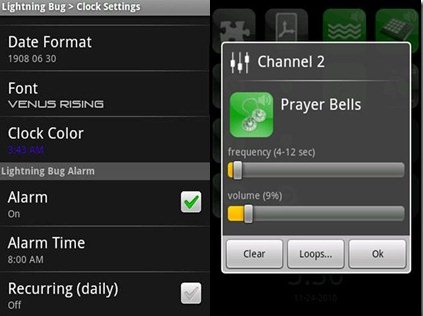 Next in line among free alarm clock app will be Lightning Bug – Sleep Clock. With an average rating of 4.6, it sets its rating high in most downloaded free alarm clock apps for Android. One of the best features includes “GROWING LIBRARY” that has sound loops along with variable range in sound effects. Known as “SOUND ENGINEER”, this free alarm clock app harmonizes various sound patterns and presents a different sound every time you use it. Commendable choices in fonts and styles have been provided with customized snooze and gentle alarm clock. Add-on premium plug-ins also available for this app makes it desirable for users.

iPhone and iPad users can check out Alarm Clock Apps for iPad and Alarm clock apps for iPhone reviewed by us. 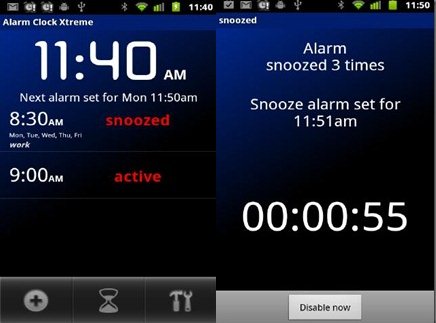 With highest user rating of 4.5, Alarm Clock Xtreme Free sets its place into the hearts and mind of people. Concentrating on a crucial quality, this alarm clock app focused on “Excessive Snoozing” and eliminated the haphazardness. Setting customized snooze effects and ways makes it flexible and likeable by all.

Waking up was never this good with free song tunes and music store it is more interactive than ever. Paid version of this free alarm clock app eliminates featured advertisements.

Check out more Android Apps reviewed by us. 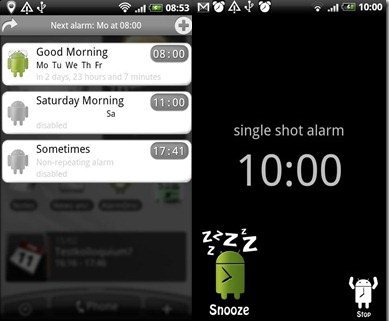 Rich in style and rich in name, AlarmDroid app for Android is also rich in deliverance. Personalizing your free alarm clock on Android was never this fun. With an increased number of downloads everyday, it has around 17,000 plus free downloads. Special feature known as “Flip n Snooze”, allows you to simply flip your mobile and activate snooze.

Based on shake mode functioning, it gives you a feeling that is not seen in any other free alarm clock app. Live Radio can be setup as alarm rings along with speaking clock which not only tells you the time but also gives weather report. 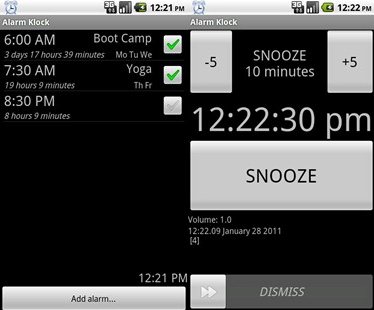 Simple and convenient, these two words define the working of Alarm Klock free app for Android. With user rating of 4.5, it is one of the most lovable apps in alarming genre. Not loaded with heavy features and styles but is most sought after and reliable free alarm clock app for Android in market today.