This Android Task Killer saves data charges by saving data from your account. I know you all must be thinking of how it is possible. For this let me give you my own example. My first Android phone which I bought was Sony Ericsson XPERIA X8. At that time I was not much aware about the applications in Android Market. I installed some applications from Android Market. These applications used to run continuously in the background. For example apps like Yahoo Mail for Android, Gmail for Android or even Google Reader for Android. These applications kept refreshing and updating date by themselves. This drained up all my data which I got from my service provider even when my phone was on standby mode. Even it had a hard effect on my SIM’s account balance. My SIM’s account balance also got low because of the applications running in the background.

At that point of time one of my friend suggested this great App “Advanced Task Killer” to kill background tasks. I installed the app and it really works well. It killed all the background task running and cleaned up the memory. The applications also stopped deducting the data charges. And there was a great improvement in my devices speed too as it cleaned up the memory. 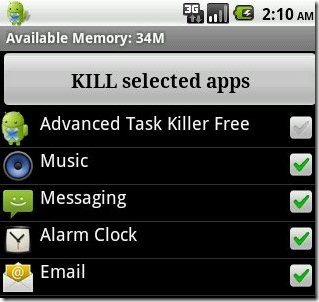 The Free Advanced Task Killer, to kill task for Android will be automatically installed. Now Kill task and clean up your phone’s memory by just a single click. Click here to download Advance Task Killer.