ColorDoku is a free puzzle game for Android which is exactly similar to the most popular game “Sudoku”, but with a colorful twist. With the colorful twist, I mean that instead of numbers, you have to arrange colors in ColorDoku. ColorDoku is also a logic-based puzzle game like Sudoku, but with colors. There are 9 different colors available to play this puzzle game. The change of numbers (like native Sudoku game) to colors makes this game even more exciting.

The main purpose of this game is to fill 9 small 3×3 boxes in a big 3×3 box, such that each column and row of the big box has all the colors in it.

Note: A single color cannot have more than 1 entry in any column or row in the big 3×3 box.

The following image shows the game with the colors, big box, and the small boxes. 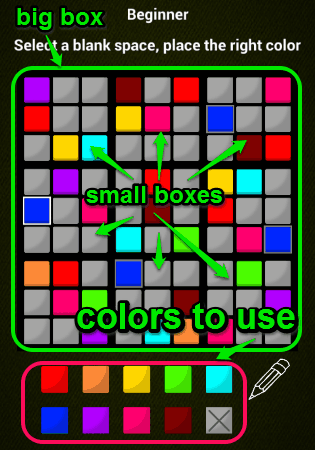 So if you want to play some other logic-based puzzle game rather than Sudoku, then you should definitely try ColorDoku. This game is pretty interesting and very easy to play. Start from the “Beginner” level and make it up to “Expert” level.  You can also track your progress or statistics for different levels. Now, I am going to explain how to play ColorDoku.

How to Play ColorDoku Puzzle Game:

Install the game from the link given at the end of this post or directly from the Google Play Store.

As soon as you open the game, there will be two options available named “Play” and “Stats”. When you select the “Play” option, it will ask you to choose among different levels. The available levels are Beginner, Moderate, Hard, and Expert. The following snapshot shows how to select a level. 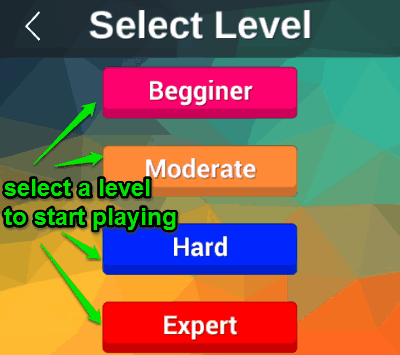 After selecting a level, the puzzle game will open up and the timer will start running. Now, select any blank space in any of the boxes and tap on the appropriate color shown below in the game interface, to place it on the blank space. Note that the blank spaces are grayish in color, so don’t get confused with blank space and other colors. You don’t have to worry in case you placed a wrong color because the game itself will show an exclamatory sign if the color placed is wrong. Simply use the cross option and remove the color placed incorrectly. The below screenshot shows the timer, blank space, cross option, and colors to use. 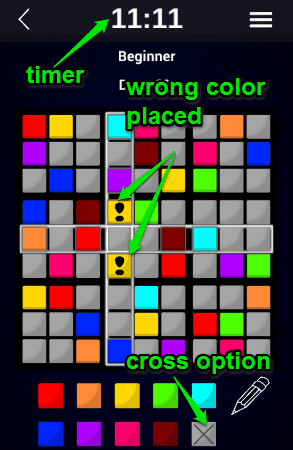 The best thing about this game is that it lets you take note for any blank space. That means you can mark any blank space with multiple colors among which you would select the correct color when needed. While playing a game, you can start a “New Game” or “Restart” the same game you are playing by tapping on the hamburger icon. In case, you feel bored then it also has an option to directly solve the game. The following screenshot shows the marked blank space and other options. 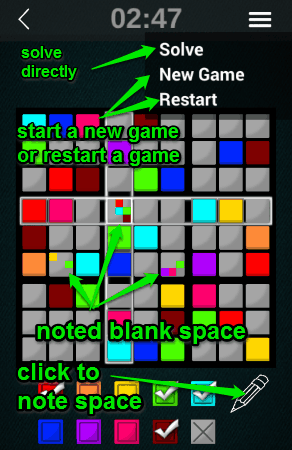 As soon as you complete the game, your  stats will update immediately. As we have discussed earlier, you can easily track your records or progress by selecting the stats option, as shown in the first image of this post.

ColorDoku is a very nice logic-based puzzle game for Android. This game will be very interesting for those who love to play Sudoku puzzle game. Personally, I like this game because it is similar to Sudoku but with colors instead of numbers. The option of taking note of any blank space for later use is quite amazing, because it reduces the chance of placing wrong colors. ColorDoku would have been a great game if it provides any pause option or sound option.