SecuBrowser is a free sandbox creator for Firefox. The way that it protects you is by running the main Firefox installation from a completely sandboxed Firefox profile, which is cloned from your main profile. All the plugins, bookmarks and setup will be the same like in the real Firefox installation. Difference is that in case you’re attacked by malware, adware, viruses, spyware and all the other online vermin, your entire system won’t be infected, only your sandbox. And you can delete your sandbox easily at any time to wipe out any infection.

This is a perfect software to use when you are browsing websites which you don’t trust, especially the ones with adult content. Instead of risking your entire system by browsing such websites in your main browser, you can just browse them in Sanboxed version of Firefox and keep your system away from any infection. 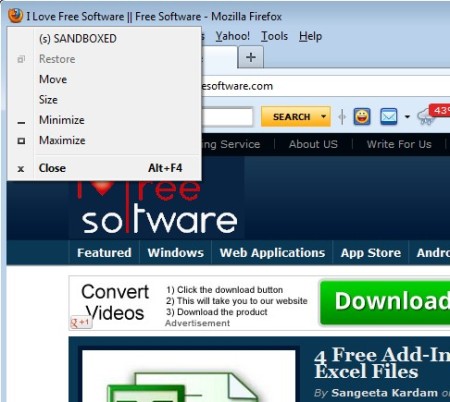 The way that you’ll know that Firefox is running sandboxed is by clicking on its icon in the top left corner and checking if you have SANDBOXED written there. By running Firefox through SecuBrowser, that tag will be added. When we say that you need to run Firefox through this free sandbox we’re referring to running it using the SecuBrowser launcher, instead of the standard one created by Firefox.

Key features of this free Firefox sandbox creator are:

Malware browser attacks are a very common thing. The most famous being the so called drive-by download attacks, when the user accepts to download and install something on impulse, without fully understanding what the installation really is. SecuBrowser will create the Firefox a new profile, detach it from your main profile folder and your system so that in case something tries to access your system, it’s not going to be able to go past the quarantined area.

How to run Firefox in Sandbox Mode:

The only thing which you need to do in order to setup the sandbox is install SecuBrowser. Launcher that’s added on your desktop will run Firefox, but if you check under the icon in the top left corner, like we already mentioned, you’re going to see that there’s SANDBOXED written there, like we already explained. 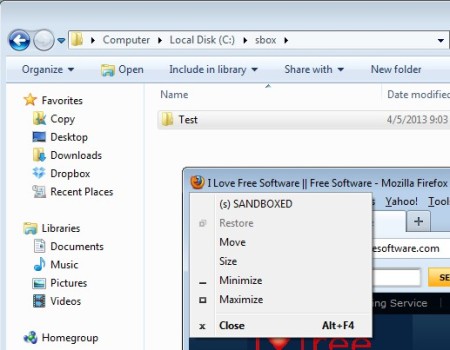 Another thing that you’re going to see is a directory named sbox created on the system partition.

Inside this directory you should see a folder which will have the same name as the user who’s currently logged in. If during browsing something goes wrong and you end up picking up an infection, simply close down Firefox, delete this folder and it will be as if nothing happened. Infection will not spread to your system and next time that you run Firefox installation, directory’s going to be recreated.

SecuBrowser makes it easy to prevent infection even before they’ve happened. This is perfect for all those who need to visit shady websites, for some reason, and would like to make sure that nothing out of the ordinary is picked up. Infections have a nasty habit of creeping in on us, sandboxes are a great way how you can protected yourself. This free Firefox sandbox creator is very simple and not very intrusive.