Here, is a step by step tutorial on How to Stop Windows 8 From Automatically Signing In Last User.

You might have noticed that in Windows 8, it automatically signs in with the last user who was logged-in on the computer, who shutdown or rebooted the system. This feature allows you to logging into your account a little faster; but if you have multiple accounts and the different users use the computer on regular basis then this helpful feature becomes a little annoying. 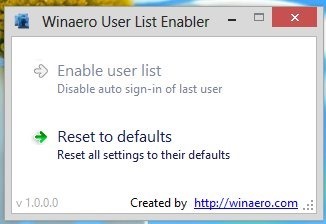 It would be more useful for the users if Windows 8 instead of automatically signing in last user, brought up the list of users of the computer and enabled the users to login more faster. So follow this tutorial learn how you can stop Windows 8 from automatically signing in last user with the application called user list enabler for Windows 8. The good thing about this little utility is that it does not change any registry, change access rights in windows, it use the tools and features that are already built into Windows in such a manner that this application is safe to use.

Steps to Stop Windows 8 from Automatically Signing in Last User: 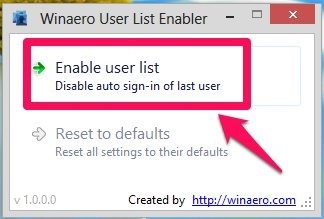 After this every time you restart your computer it will boot into the interface from where you can select the user instead of the automatically signing in the last user.

Some more tutorials on Windows 8:

How To Create Ad Hoc Network In Windows 8

How To Disable SmartScreen In Windows 8

How To Open Device Manager In Windows 8