Twint is a free Twitter scraper to scrape tweets containing email addresses, phone numbers. This tool takes a Twitter user handle and then downloads all the tweets of that user which contain a lead. This is a command line Twitter tool where you don’t have to use API credentials to get tweets of a user. Also, if you only want to get tweets that contain an email address or a phone number then you can do that. All you have to do is just specify some switches in CLI based on your needs and it will do its work. Apart from scraping tweets this tool can do some other things such  downloading Twitter followers of any user, downloading favorite tweets, and some others.

In digital marketing, getting leads is an important part of the business. And that is where tools like these come in handy. To get emails addresses from Twitter you can use some other paid tools out there. But for free you can do the same with the help of this Twitter scraper that I have mentioned here. You just run it from command line and then simply let it do its work. It grabs all the tweets that it finds which have an email address and show that to you. With some CMD tweaking, you can even save the tweets to a file as well.

Using this Twitter scraper, Twint to get tweets containing leads is very simply. This tool is written in Python and you can install it by running a single command. Since there is no need to sign in or using API keys so you can directly get started with it. To install this tool, simply open command prompt or terminal with elevated privileges and run this command. 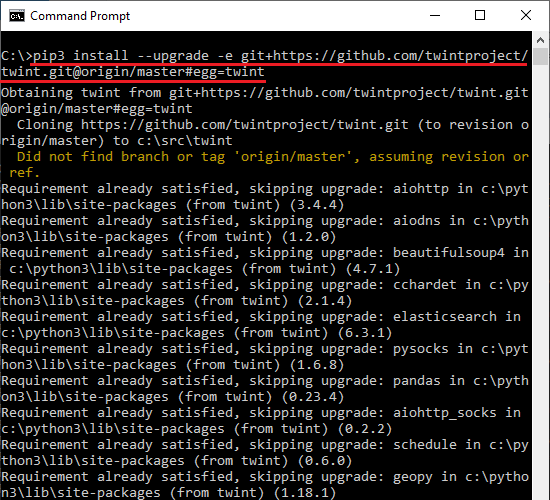 Now, when the tool is installed, you are ready to use it. To use this tool for getting tweets containing tweets with contact information, use the following command. Specify the Twitter handle carefully and execute this. It will start searching for the tweets and as it finds one, it will throw that on the CLI. You can keep copying the tweets that it gives and do whatever you want. 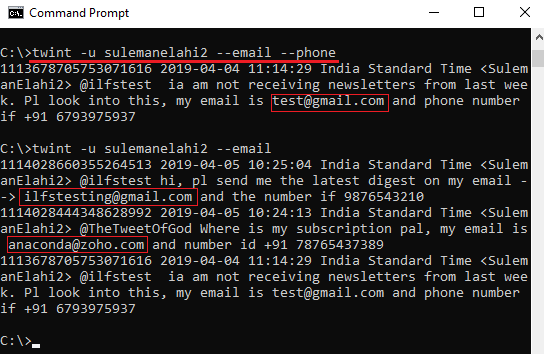 If you have some experience of playing with CLI tool then you can save the output of the above command in a file. To do that, just append “> filename.txt” in the command I have mentioned and then it will take care of the rest. All the tweets from the target account will now be saved inside the “filename.txt” file.

That is how you use this Twitter scraper to get Tweets containing email id or phone number. The above command I have shown works perfectly and the process can take time as it depends on number of tweets in the target account. Also, do note that the accuracy of this tool is not 100 percent this because of the limitation of the Twitter API. But it works most of the time.

Twint is one of the best free Twitter scraper out there which you can use right now. And its ability to scrape Tweets containing an email address or phone number is amazing. If you are looking for some free tool to get tweets from Twitter that have an email addresses in that, just run the simple commands from your terminal and then simply get the tweets. If you know of some other tool to do the same then you can tell me.