Here’s a list of 4 flipbook creator software for Windows 10. A flipbook is a great way how to present information in a nicer package than the usual image slides or text documents. Software that I tested will help you create flipbooks as either standalone executables, HTML pages or iOS and Android apps.

Let’s see how exactly it is that these applications work and what kind of features each one of them has to offer. 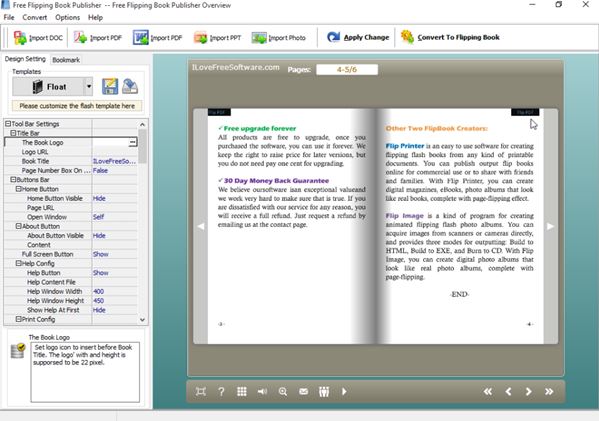 Free Flipping Book Publisher is a flipbook creator software that lets you load up text documents (TXT and RTF) and after that convert their pages into pages of a flipbook. Created flipbooks have the page turn effect with sound effects.

Flipbook appearance is changeable either by selecting different templates (dozens are available), or by tweaking it manually using the left sidebar. EXE, ZIP, HTML and APP (iOS and Android) formats are supported for flipbook export. 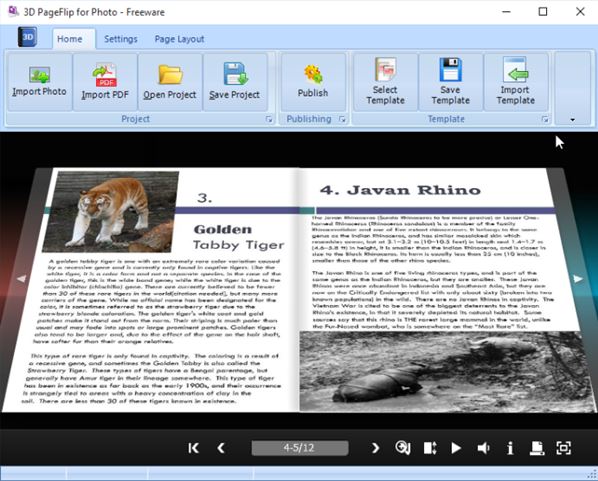 3D PageFlip for Photo lets you load up photos and then turn them into flipbooks that have a 3D effect, instead of just giving you a static birds eye view.

Supported image formats include JPG, BMP, GIF, PNG, TIF, ICO and JP2. Half a dozen flipbook templates are available, and you can tweak things like tilt angle, flip interval in auto flipping mode, base color and more. Flipbook that you setup can be exported as HTML, ZIP or standalone EXE.

Get 3D PageFlip for Photo.

Also, have a look at Create Free Flipbooks with Toolwiz Flipbook. 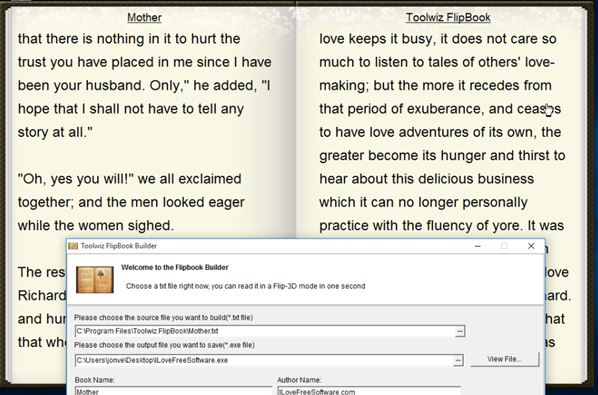 ToolWiz FlipBook is a much more simpler flipbook creator software than all the others that I tested. It has a wizard like setup, but the wizard consists of just 1 step, the one that can be seen on the image down below. TXT documents are supported as input, while only standalone EXE applications can be created as output.

Flipbook appearance cannot be tweaked to such a great extent. Very simplistic things like font, width, height and author info are changeable. 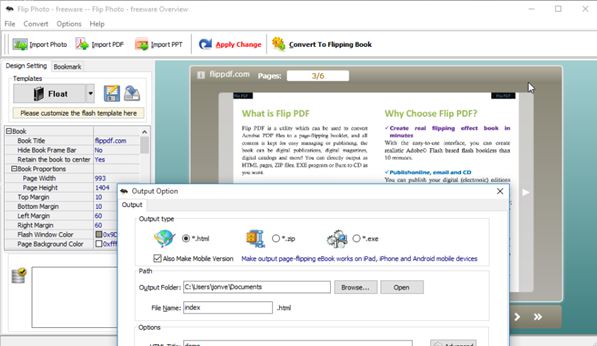 Free Flip Photo is very similar in functionality to Free Flipping Book Publisher. In fact if you look at their screenshots, you’ll notice that the applications have identical interfaces.

Where these two applications are different is format support. Here you can load up sets of images and convert them in a flipbook. Free Flipping Book Publisher works with text documents. Appearance is configurable either via templates (for the lazy) or custom tweaks can be done using the left sidebar. Supported export formats include EXE, HTML and ZIP.

If you’re looking for a simplistic flipbook creator software for your Windows 10 powered machine, then I suggest that you have a look at ToolWiz FliBook. It’s simple to setup and everything just works. For something a bit more advanced use either Free Flip Photo or 3D PageFlip for Photo. Either one is fine if you ask me. Leave a comment down below and tell me what you think the best flipbook software for Windows 10 is.