This article talks about 5 best sound recorder software for Windows 10. Our computers are incredibly capable machines on their own, and can perform a diverse array of tasks. However, connect some extra peripherals such webcam, microphones etc., and their capabilities increase manifold. Speaking of microphones, they’re pretty useful, and you can use them to record dictations, create audio logs, and even practice singing. All you need is a good sound recording software. But with so many out there, finding out the one that works best with your Windows 10 PC can be pretty confusing.

Not to worry, as that’s all what this article is all about. These sound recorder programs let you record unlimited length recordings, and save them to multiple popular formats such as WAV, MP3, and FLAC. Some of them even include advanced editing features. Intrigued? Let’s find out about 5 best sound recorder software for Windows 10, in a bit more detail. 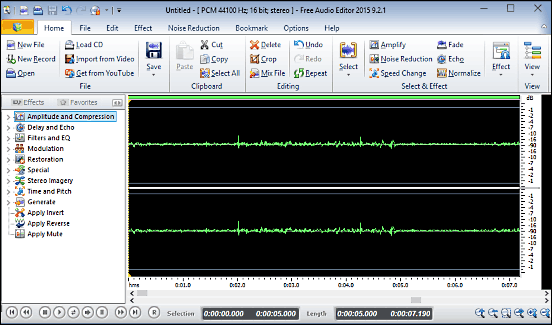 Starting off things is Free Audio Editor, a feature packed and powerful sound recorder software for Windows 10. As the name implies, Free Audio Editor is a fully capable audio editing application, and the audio recording capability is just one of the many goodies it comes with. The application makes it incredibly simple to record audio from nearly any sound sources, and can automatically detect the audio input device (i.e. microphone) connected to the computer. The recordings can be of unlimited length, and you can choose whether to include silence in the recordings or not. Once you’re done, the recording is automatically loaded up for editing, where you can apply a whole bunch of edits to it. There are also a number of effects (Flanger, Phaser, Reverb etc.) that can be applied to recordings. Apart from that, you can change speed, pitch, apply noise reduction, invert channels, and do a heck of a lot more. The recordings can be saved into a number of popular formats such as MP3, OGG, and WAV. Just make sure to skip the bundled applications during installation. Find out more about it here. 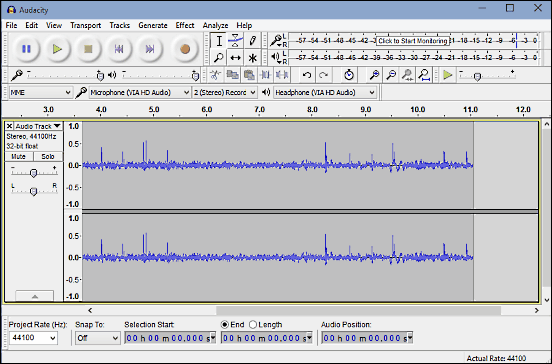 It’s nearly impossible to talk about audio editing programs without mentioning Audacity. Filled with goodies, Audacity is a powerful open-source audio editor application, that also happens to pack in some great sound recording functionalities. Audacity lets you record unlimited length recordings, and can easily record from a microphone, or a mixer. It can even digitize recordings from other media (tapes, LPs etc.), and capture streaming audio. The level meters make it easy to monitor the audio levels during and after the recording. In addition to that, you can also create timer and sound initiated recordings. Once the recording is done, it is displayed as waveform, and can be edited using the plethora of editing tools and effects (Auto Duck, Fade Out, Paulstretch etc.) Audacity offers. The edited recordings can then be saved in a number of formats, such as WAV, OGG, FLAC, AC3, and WMA. To find out more, click here.

The applications discussed so far are all great when it comes to sound recording, but they also include a whole bunch of extra features that make them kinda complicated. If you want to have a simple audio recorder program for Windows 10 that’s still quite capable, look no further than Free Sound Recorder. Having an impressively straightforward interface, Free Screen Recorder lets you record as much as you want, without requiring you to configure a hundred options. Simply press the Record icon, and Free Sound Recorder will take it from there. What’s more, once you’re done recording, the application will automatically save it to the specified folder. You can also configure the format for saving the recordings, and choose from popular ones like MP3, OGG, WMA, and WAV. And that’s not all. Free Sound Recorder also lets you schedule automatic recordings, and record with/without silence. Then there are goodies like hotkeys and automatic gain control as well. 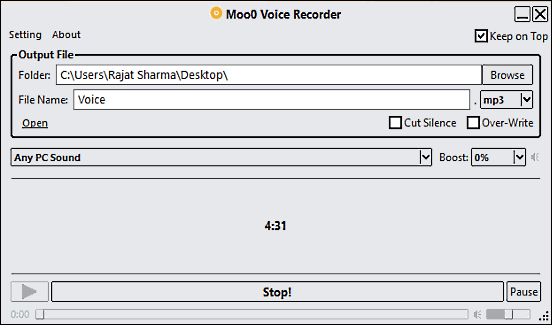 Probably the most standout feature of Moo0 Voice Recorder is just how lightweight it is. But once you get past the weird alphanumeric mumbo-jumbo that its name is, Moo0 Voice Recorder is actually a pretty awesome sound recorder software for Windows 10. The user interface is one of the most minimal that you’ll ever see, and has just the basic options. You can configure the output directory, default file name, the format to save the recordings in (WAV and MP3), and then some more. Apart from that, you can also specify whether or not to cut silence, over-write existing files, select the sound to capture, and automatic boost. However, click on the Setting option, and you’ll see the Moo0 Voice Recorder offers quite some goodies, such as recording quality adjustment, renaming rules, keyboard shortcuts, and of course, a whole bunch of color changing skins. And you can make it transparent as well. To know more, click here. 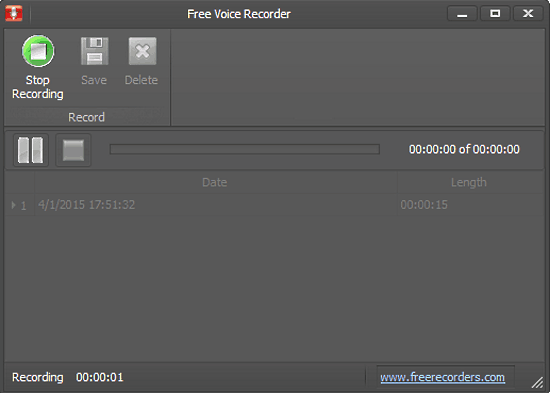 If you’re looking at some great sound recorder software applications that are both functional and easy to use, the above discussed programs should work just fine. Take them for a spin, and let me know what you think in the comments below.