Here is a list of 5 Free Android Apps to Capture Photo of Person who tries to login to your phone. These apps let you know if someone tried to access your phone when you were away. And they are going to capture a photo of the intruder while he is doing the act. 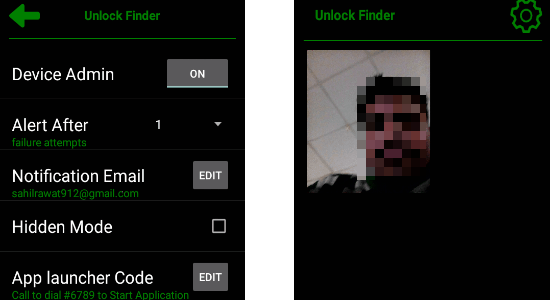 Unlocker Find is probably one of the best apps to find the intruder, who tried to unlock your phone in your absence. Actually, it monitors your device and after failed unlock attempts, it notifies you via email. The person who checked your phone or tried to sneak into your phone gets caught by this app easily. It uses the front camera to take pictures of the person. The important features of this app are email alerts, scream alerts, hidden mode, and the GPS location notifier.

It always sends an email alert with the photo of the intruder along with the time and location stamp. Not only that, it also sends you the GPS location of the place of intrusion to your email address. Now, the fun part is the “Scream” alert, which plays a scream sound when someone tries to unlock your phone.

Another important feature is the “Hidden Mode” which hides the “Unlocker Find” icon from the home screen. In such case, you’ve to dial a secret code to open up the app.

Also Read: How to Get Email Whenever Someone Logs In to Windows. 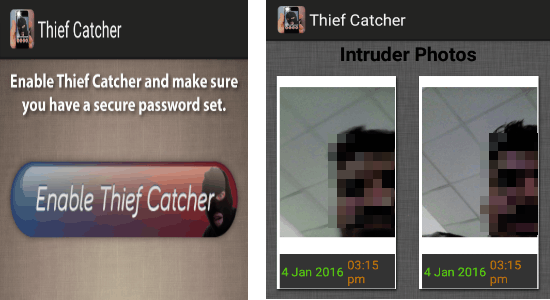 Thief Catcher is a very useful app for Android to catch someone while trying to unlock your phone, without your knowledge. Each time someone fails unlocking your phone, this app automatically captures a photo of the person using the front camera. If you want to know who tried to use your phone in your absence, then this app is definitely for you. As soon as you unlock your phone, all the photos taken by this app will be displayed with the respective time stamp. 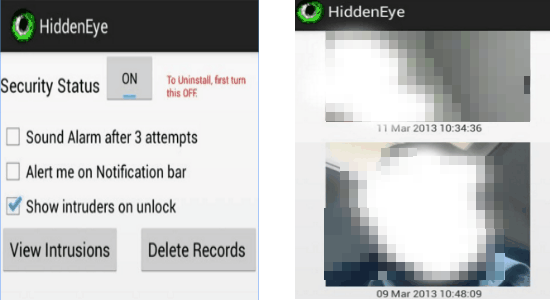 Hidden Eye is another interesting app for Android, which capture photos of an intruder while trying to unlock your phone. That means when someone enters an incorrect pin or draws a wrong pattern, it automatically takes the photo of the person. In addition to that, you can also set to play a ringtone or alert tone, when you’re not around and someone tries to unlock your device. The only catch is that after the first failed attempt to unlock the phone, it captures a photo and after 3 failed attempts, it will start playing your ringtone or alert tone.

The photos are captured along with the date and time of the intrusion. All the photos will get automatically saved in the photo library as well as Dropbox (if connected). If the front camera of your phone is not working, then do not worry as the alert tone will always play after 3 failed attempts. 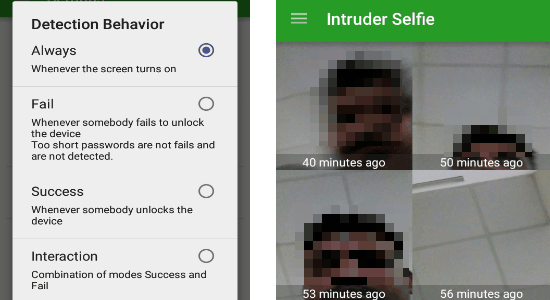 Unlike all the above apps, “Intruder Selfie” comes with some advanced features like picture delay, pictures limit, detection behavior, notification, and auto cleanup of images. For each unauthorized unlock attempt, this app captures a selfie of the person who is trying to unlock your phone. Using this app, you can easily know who and when the intruder tried to access the phone. Each time a person feeds a wrong pin or pattern, the photo of the person is captured and automatically stored in the library.

Other than that, it lets you set delay time before taking a photo, pictures limit for each intrusion, get intrusion notification, and finally the detection behavior. There are 4 different aspects within the detection behavior option named, always (whenever the screen turns on), fail (failed unlock attempts), success (when someone unlocks the device), and interaction (combination of modes success and fail). 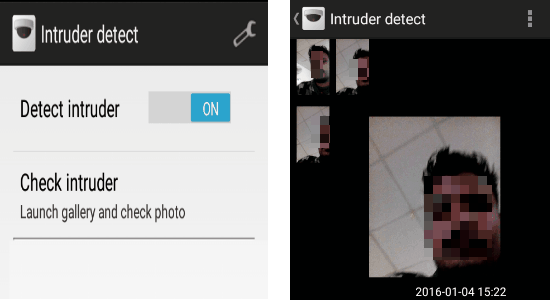 The last but not least is the “Intruder detection“. It is the simplest app among all of the above apps. No matter you set a password to unlock your phone or not, each time someone unlocks your phone a photo is captured. The photos are captured in the background, and without the knowledge of the intruder. No more worries about who might have checked your phone in your absence, as this simple little app helps you know the person with images.

The working of this app is super simple, as all you have to do is set the “Detect Intruder” option “ON”. To view intruder’s photo, select the option “Check Intruder’ and open up the gallery. The only shortcoming that I found in this app is that it takes photos of all the people who unlock your phone, including you.

If you feel someone else tries to login to your phone in your absence, then it is a good idea to have one of these apps. My personal favorite is Unlocker Find, as it can send you email with the photo and location of the intruder. Which one in this list do you like the most? Let me know in comments below.