Sometimes, you might wonder if anyone tried to sneak into your phone while you were away. That is what this Android app “Hidden Eye” tells you. Hidden Eye is a free Android app that captures a photo when someone tries to unlock your phone with wrong pin or pattern lock. It can also play your phone’s ringtone and notification tone when someone tries to unlock your phone without your knowledge. For each failed attempt, it will capture a photo of the intruder, and for continuous failed attempts (three failed attempts) it will play your ringtone. Along with the photos, it will also show the date and time when someone tried to unlock your phone. One of the interesting thing about this app is that all the captured photos get stored on your camera roll. If you have set Dropbox for syncing your photos, then the captured photos will also get synced with Dropbox, letting you access the intruder photos from any device.

The following screenshot shows the photo captured by “Hidden Eye” during failed attempts. 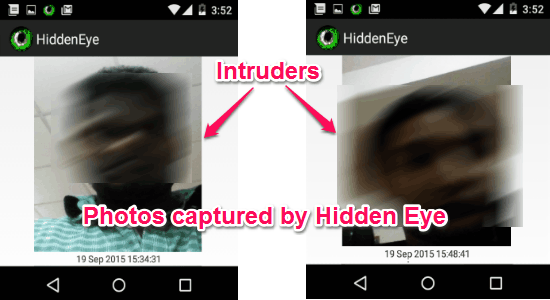 If your phone doesn’t have a front camera, then do not worry as the ringtone feature can still be useful for you. You will be able to see a blank image instead of the intruder’s real photo. But the ringtone will be triggered as soon as the intruder tries unlocking your phone thrice.

Note: “Hidden Eye” detects failed attempts only when the password length is at least 4 letters or numbers.

How to Set ” Hidden Eye” to Capture Photos of Intruders:

You can download and this excellent app from the Google Play Store or from the link given at the end of this post.

First, enable the screen security lock in your phone settings. Simply go to Settings→ Security→ Screen lock and enable the security lock. Now, install and launch the app to set “Security Status”. Simply click the default “OFF” button to change the security status to “ON”. You can enable sound alarm (after three attempts), notification alert, and show intruders photo after unlock. It also lets you view and delete the intrusion’s record in the same screen with above options. The following screenshot shows the different options to set up security status to “ON”. 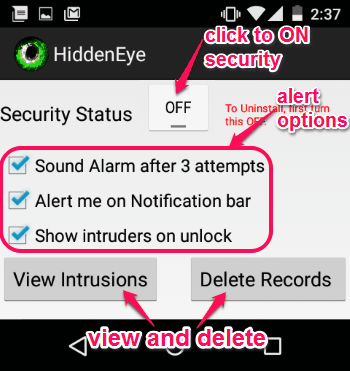 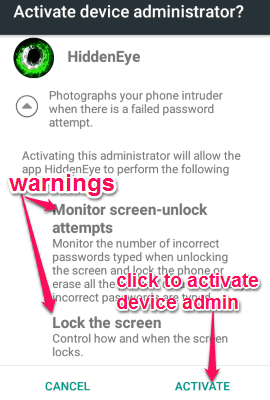 All you have to do is set the security status to “ON” with the above steps, that’s all. As soon as you unlock your phone, you will be able to see who tried to unlock your phone with failed attempts and at what time. So, if anybody tries to unlock your phone in your absence then this app will help to figure out the intruder. In the first screenshot of this post, we have seen how the photo will be captured by “Hidden Eye”.

The uninstallation process of this app is quite different from the other apps. Before uninstalling the app, you have to deactivate the device administrator and set the security status to “OFF”. Simply go to Settings→ Location and Security→ Device Administrator in your phone and deselect “Hidden Eye” app. After that, you can easily uninstall the app from your phone.

If you ever wanted to know who tried to unlock your phone in your absence then using “Hidden Eye” will probably be the best way to do so. This app captures photo of the intruder for each failed attempt. If your phone doesn’t have a front camera then it can trigger a sound alarm (ringtone) after three failed attempts. Personally, I liked this free Android app for phone’s security purpose. This app would have been better if it allows to delete photos while viewing them.

Try the app from the link here.