‘Virtual Drives Manager’ manages to fulfill a need of computer users that has been known for some time now, but nobody thought of addressing it. The number of logical drives on a computer often falls short. Although Windows now provides a logical disk creator in its latest operating systems, the novel approach taken by the developers of this program is a lot simpler. 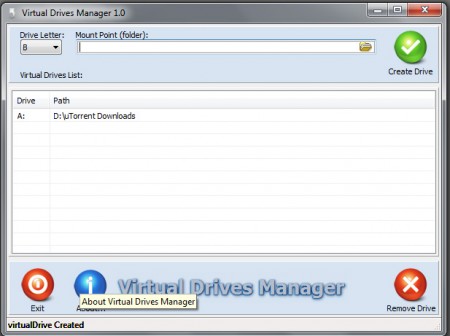 Features of this virtual drives manager

The program is tiny and doesn’t boast too many features. It lets the user choose particular directory and then the program makes the operating system believe that the folder is a virtual drive. This is done through a Symbolic Link, similar to a device name on MS-DOS. The benefits of this are manifold. There are some applications which insist that the installation be done on a clean drive. Some users might wish to divide their existing partitions in such a way that they can use each partition for a particular type of data. The drives that the program creates remain after the computer is restarted. If that were not the case, then the software would be useless. The users would need to create the logical drives every time they logged on to their system and that would spoil the purpose of the program. The program also doesn’t need to be installed, so it’s simple to use.

The program is less than 1 MB in size. It doesn’t require any installation and can be run on any recent Windows operating system such as XP, Vista and 7. The lack of an installation procedure also makes this a simple program to use.

You can also check out free software to encrypt virtual drive.

The program makes it very easy to access folders that are regularly used, or install particular applications. The interface is pretty straightforward and has concise instructions. There are two drop-down menus; one lets the user choose the nomenclature of the drive and the next one allows the user to choose the destination folder that the aforementioned drive would point to. Once these two have been chosen, there is a button which the user can click to confirm his choice. Once that is done, the drive is created. The user can check the veracity of this by going into the explorer and the new drive is displayed. The number of partitions that a user can have is limited by the number of letters in the alphabet, but then nobody will ever realistically need more than 26 partitions. Besides, Windows doesn’t allow any more drives than that. If a drive is no longer needed, it can be removed using the same software, but the data in it won’t be lost as it is only a logical drive. 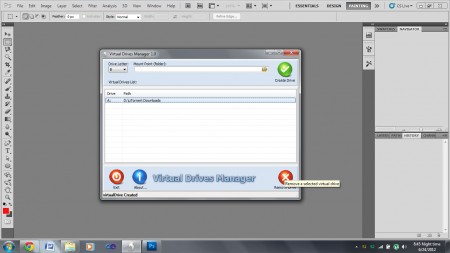 This is a very simple way of accessing your frequently used folders without cluttering your desktop. The logical drives can also be renamed to show what data they contain, so it won’t be much hassle to find out which partition contains what data. All in all, Virtual Drives Manager is a good and light software to have on one’s system.