Aqsis is a program with a peculiar name which can be used to render 3D graphics. Program is fairly simple and it doesn’t have a lot of advanced options, which isn’t a surprise since the program is intended for 3D rendering only, it cannot be used to actually create 3D graphics, that’s not what rendering means. The purpose of Aqsis is to create quick renderings of 3D descriptor files and nothing else. You should use this program alongside other software that actually has 3D modeling functionality, Blender for example. 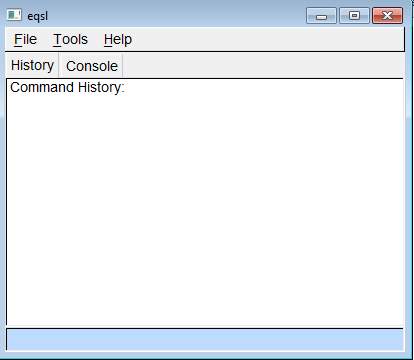 This is the default window which will welcome you after you install Aqsis. Please note that the latest version of the program, version number 1.8, doesn’t work on Windows or Mac, only on Linux. Aqsis is usually a cross platform software, but there were problems with Windows and Mac builds when the latest version was being created which means that Win and Mac users have to download and use version 1.6.

What is 3D graphics rendering

Before we start with a more detailed explanation of how you can render 3D graphics with Aqsis, it’s necessary to explain what exactly rendering would be. There are several different activities that are associated with the word rendering, several different rendering techniques to be more precise. What Aqsis does is it creates 3D graphics or 3D scenes from the so called RIB files. RIB stands for “RenderMan Interface Bytestream”, which is the syntax used in the RIB files. This syntax describe the appearance of 3D graphics, it’s the thing that’s behind the graphical tools and interfaces that we are used to, here’s a snippet of how a RIB file looks like: 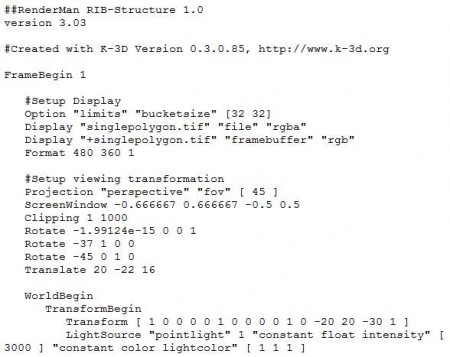 Don’t be frightened or alarmed, it’s not necessary to know this code in order to create 3D graphics. It can and is created automatically in 3D modeling programs. Think of Aqsis as a viewer for the RIB descriptor files.

How to open RIB files in Aqsis 3D graphics renderer

Opening a file is quite easy, don’t go under file, but rather click on Tools and select Render File. You’ll be presented with a selection where you can locate RIB files that you’re interested in viewing. Program comes with examples installed, so you can use them to test rendering capabilities of Aqsis:

This is a screenshot of how rendered graphics look like in Aqsis. Notice the two tabs called History and Console located in the main window of the application? This is where you can observe how the rendering is progressing, if there are any errors present. Sometimes it’s not possible to render graphics because the file is corrupt or not written very well.

Aqsis also supports the RenderMan Shader Files, these are called SL files, and they can also be opened and added to the basic RIB files to add a little bit more reality to the renderings.

For what it does program is very simple to use, and it’s very lightweight, considering that we’re talking about graphics rendering. Keep in mind this is just for rendering, for actual 3D modeling you’re gonna have to look elsewhere, but for simple rendering Aqsis is more than enough.