This tutorial explains how to enable Toggle Keys in Windows 10. The humble keyboard, with its standard set of keys, has been an essential part of the computing hardware ever since its early days, and it still remains so, as the primary input device. As even the beginner computer user would know, the keyboard consists of different types of keys, serving a whole lot of varied functions. It’s no wonder that almost all modern Operating Systems, including Windows 10, have features dedicated to specific keys of the keyboard.

One such feature is Toggle Keys. Intended for probably the most popular trio of keyboard keys (Caps Lock, Num Lock and Scroll Lock), the primary function of Toggle Keys is to sound audible notifications whenever any one of these three keys is used. These aural notifications are really handy, as they immediately let you know whether the function related to a particular key is enabled/disabled.

How To Enable Toggle Keys In Windows 10?

Enabling Toggle Keys in Windows 10 is a pretty simple and straightforward task, and requires just a little clicking here and there. Jump to the stepwise tutorial below to see how it’s done:

Step 1: Launch the modern (earlier known as metro) UI style PC Settings app. From the left column, displaying a listing of all major tweaks, click on Ease of Access. 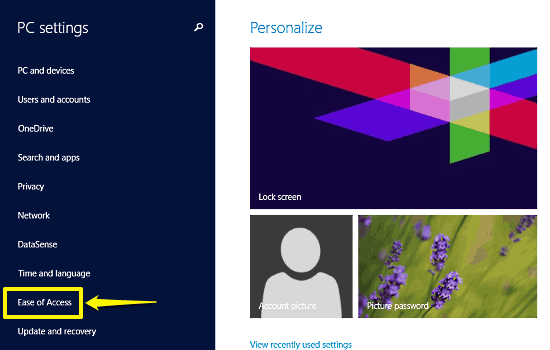 Step 2: You should now see some more options show up on the left, relevant to Ease of Access. Click on Keyboard, and its settings will pop in the bigger right column. Simply head over to the Useful Keys subsection, and click the virtual slider switch corresponding to the “Toggle Keys” setting to On. Check out the screenshot below: 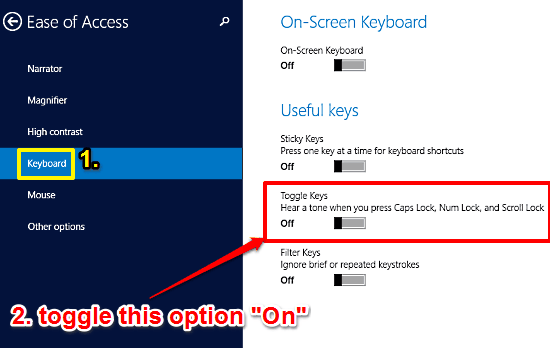 That’s it. Going forward, you’ll always hear an audible notification whenever any of the Caps Lock, Num Lock and Scroll Lock keys are used. Simple, right?

Check Also: How To Disable Taskbar Animations In Windows 10?

Toggle Keys is a pretty small but useful functionality of Windows, as it immediately lets you whenever Caps Lock, Num Lock and Scroll Lock keys are used, via audible alerts. This is especially handy in case of older keyboards, that don’t have status indicator lights for these three keys. Give it a try, and let me know what you think in the comments section.