The tutorial talks about how you can convert 2D photo to 3D photo on Facebook.

Facebook released this new feature called 3D Photo on Facebook back in 2018. However, the feature was being accessed by those who had phones with dual cameras. Luckily, Facebook has improved its technology and now it lets every user avail 3D photo feature using a single real camera phone.

You can now turn any old and ordinary image into an interactive Facebook post with a new 3D Photo feature. As per Facebook, the purpose of creating this feature is to make it available for millions of users who want to create a depth effect on their photos.

This feature gives you a good experience of lively photos on their Facebook account. Let’s get into detail and learn about how to turn your photos into an amazing 3D effect.

This feature can be used on Android as well as on iPhone devices. In this blog post, I am going to share my experience with 3D photo on iPhone.

In order to convert 2D photos to 3D photos on Facebook, you can the following steps. 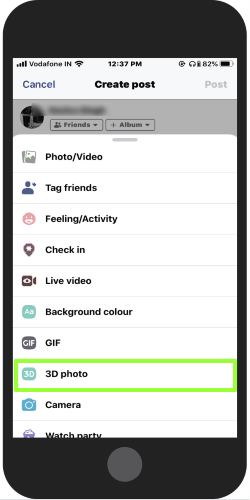 Note: The image should not be high in exposure as it may spoil the result. And, you can add one image at a time to make it 3D.

The process of creating 3D images on Android is as same as iPhone. All you have to open your Facebook app and go to create a new post. Here, you can scroll down options to find a 3D photo feature. This will convert your 2D photo into 3D quickly.

Things you need to know about the 3D photo feature.

As mentioned earlier that Facebook has already come up with a 3D photo feature in 2018. Yet not every user was able to use this feature as this supported only a dual-camera phone. But with the improved AI technology, Facebook makes it available for you whether you are single-lens camera user or dual. Try this feature on your phone and transform your boring photos into a cool 3D effect to share it on Facebook.