Video Converter is a very customizable video converter extension for Chrome. It’s packed with so many features that you might think it’s a desktop converter, but it’s not.

First you open up the video that needs to be converted. They can be loaded from your computer or from Google Drive, Dropbox, SkyDrive and website URLs. All the common audio formats are available MP4, AVI, MPEG, FLV, MP3, WAV with support for device presets (Apple, Android, Samsung, Blackberry). Those who don’t wanna use presets can adjust resolution and output file size down below before clicking on the Convert button to start the conversion. 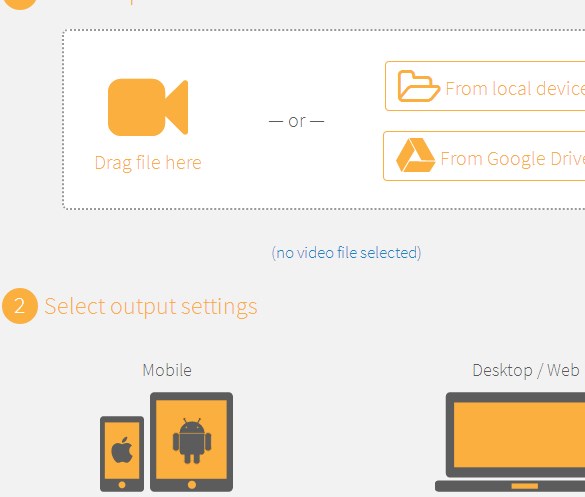 clipchamp is another converter where videos for conversion can either be loaded from the computer, or you can do a Google Drive import.

Grab Tube’s Converter is much simpler than the two previously mentioned video converter extensions, which can be seen on the image down below.

Videos and audio tracks of up to 40MB in size can be converted using this app. All the standard formats are supported, MP3, 3GP, AVI, FLV, MPG, etc. Once that the file is selected and you click on the Convert file button, the conversion is gonna start and you’ll be offered with a download of the converted file once it finishes.

CloudConvert is a video converter extension for Chrome which converts much more than just video. It supports close to 200 formats and it covers everything from media, documents, images. Suffice it to say it’s not just videos that are supported.

Select a file and you’ll be taken to the appropriate converter settings page. I selected an AVI video and that led me to the media converter where I was given options to adjust the conversion parameters, see image above. When you’re done, click Convert and watch the magic happen.

All the video converter extensions and apps mentioned above worked great for me. Some are a little bit more limiting, like Grab Tube’s Converter, while others give you more freedom when it comes to file size and conversion settings. Give them all a try and let me know how it goes in the comments down below.