For this reason we decided to look up social post scheduler apps for all the popular social networks out there. 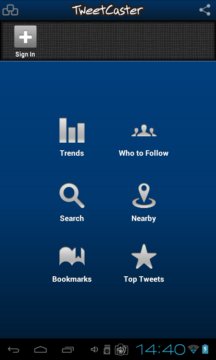 Not only that you can schedule tweets on Twitter, but you can also share them right away with your audience on Facebook. In essence TweetCaster supports multiple social networks in its function as a social post scheduler app. It goes without saying that you will need to grant access to your profiles in order for TweetCaster to be able to work. 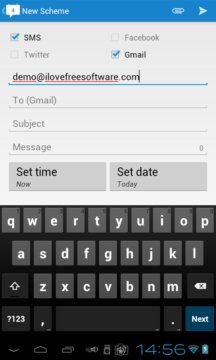 Schemes extends TweetCaster’s list of supported services to include SMS and Gmail. With this one app, you’ll be able schedule tweets, facebook updates, SMS messages and email, all from its very simple to use interface.

Schemes will ask for access to your accounts on startup (Facebook, Twitter and Gmail) so that it can post in your behalf. Once that the accounts are setup you should be able to start creating messages by clicking on the create message button in top right corner. Create the message, select services and contacts where you want it sent and lastly down below select the time and date when the message should be sent. To finish setup, click on the schedule button in the top right corner and that’s it. Message is gonna be sent at the scheduled time. 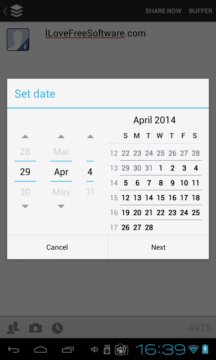 Buffer is actually an underlying social post scheduling app that’s used by TweetCaster and several other similar apps for social post management. TweetCaster is basically a better frontend for Buffer, but Buffer can work perfectly fine on its own.

Buffer supports practically all the most popular social networks, Twitter, Facebook, Google+, LinkedIn, App.net and about half a dozen others are supported. Note that you might not be able to login with Facebook or any of the other social account, you’ll have to register a Buffer account using email, connect your profiles with Buffer and start creating/scheduling posts. 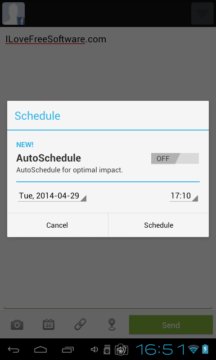 App is pretty straightforward and easy to use. One thing that sets it apart from all the previously mentioned social post scheduler apps is that it has a feature called Automatic Scheduler that automatically schedules posts and updates for maximum reach (using it’s own fancy algorithms).

We suggest that you try Schemes and HootSuite and work from there. Most of the social scheduling apps from the list above support all the popular social network, so you can’t go wrong, no matter which one you choose. Try them all and let us know how it went in comments down below.