Here’s a list of 5 timetable apps for Android which you can use to better manage your school schedule. Managing time while having a full schedule and seemingly never ending list of tasks isn’t easy. Timetable apps can come in handy in these types of situations because they give you a graphical overview over the daily, weekly, monthly and even yearly tasks that you have. It’s less likely that you’ll forget a class or extracurricular activity when everything is nicely organized.

Let’s see what we have. 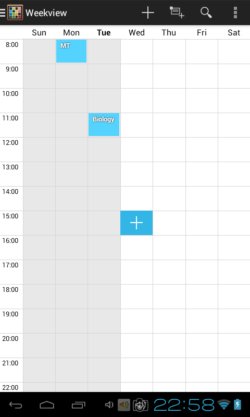 This timetable app is rich with options that let you easily manage your school schedule and tasks.

The app lets you manage classes, appointments, exams and important activities that you might have for school. Items added to Timetable can be viewed as a grid or a timetable, like the one on the image above. Alternatively there’s a daily overview, where each day of the month gets its own page through which you can then swipe. Other features include syncing across devices and automatic volume muting when a class begins.

Get Timetable by Gabriel Itnerr. 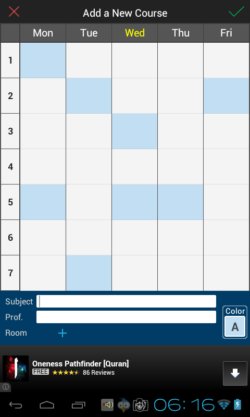 Handy Timetable is easier to use than the previously mentioned Timetable. It’s again a timetable optimized for students, both high school and college.

Empty timetable is available as soon as the app is opened. To add new classes to the timetable you’ll have to tap on the plus icon in the top right screen corner. Select the squares where you want the classes added, several classes can be added at once, type in class name, professor name, room number at the bottom and you’re done. 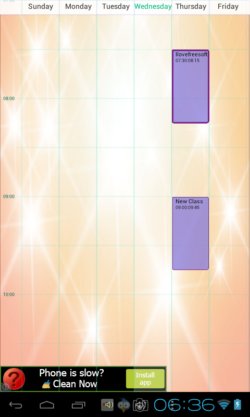 If you thought that Handy Timetable looked easy to use then you’re gonna be even more impressed with TimeTable by Jumitech.

Apart from a timetable, there aren’t any other menus that you’re gonna see after running the app, only a timetable is available. To add new classes to the timetable you’ll have to swipe from either left or right which will add the usual “timetable block” that signifies a class, a meeting or some other type of appointment. 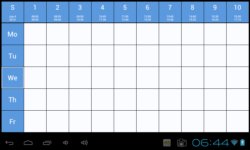 Quick TimeTable is a bit more advanced timetable app for Android where you even have backups, in case you’d like to backup your timetable and then restore it later on or on a different device.

Classes are added by tapping on empty timetable boxes. You get to control the length of the week (5, 6 or 7 of “working days”), same thing is true for the number of hours that a day has. Widgets are also available for easier access to timetables. 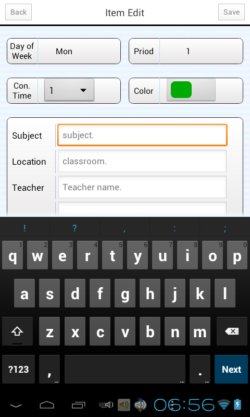 TimeTable by Dev Jangmo is another app that’s easy to use and next to the main timetable app, you also get widgets which you can use.

Upon starting the app you get an empty timetable. Tap on an empty spot to start adding classes to the timetable. Image above shows how the class editor looks like.

Get TimeTable by Dev Jangmo.

TimeTable by Jumitech is a bit too simplistic for our taste, but the one offered by Dev Jangmo, the last one on the list has the best ratio of functionality and ease of use. Others are also very useful, try them all and let us know which one you think is the best in comments down below.