Bonis Audio Player is a free portable and lightweight lossless audio player for Windows which comes with a waveform analyzer, support for song looping, speeding up or slowing down and also selector with the help of which you can loop only certain parts of songs that you listen to. This is a portable audio player, which means that you can use it from a USB flash drive, without having to go through installation. 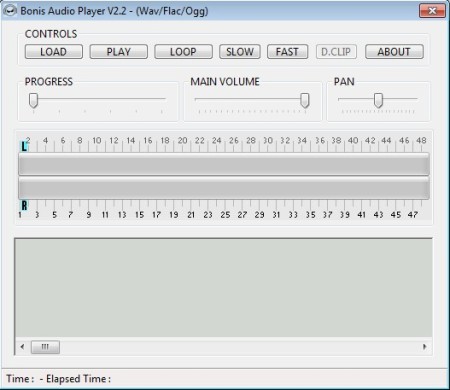 Screenshot above shows us the default interface of Bonis Audio Player. Controls area at the top holds everything that you need in order to listen to songs and for you to do some light corrections as they’re being played. Corrections like song speed up and slow down and looping. Three sliders down below can be used to rewind music, adjust volume and pan the song that you’re listening to, pan through the waveform preview which is gonna open up down below. In the middle you can check in real time the audio levels of right and left audio channels separately if the song that you decide to listen to has them. Key features of Bonis Audio Player – free portable audio player are:

Only three formats are supported by this free audio player. That’s because this is a lossless audio player, which focuses on playing high quality audio tracks. Common song formats like MP3 are compressed and even though you can’t hear it, even the best quality of these formats have quality degradation up to a certain point. Let’s see this free audio player in action.

Start by opening up the song that you want to listen to, click Load from the Controls Section. Only one song can be opened at a time, which is a bit of a drawback. As soon as you open up the song, they’re gonna play. Audio levels are gonna start moving. This is especially useful when you need to keep track of levels for separate channels. 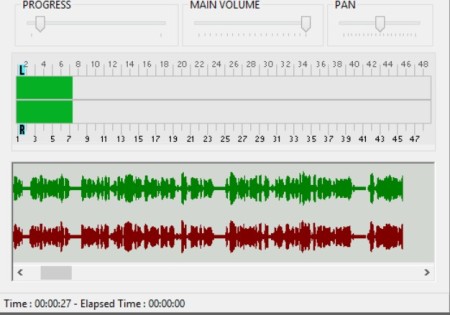 Use the sliders to rewind the track, adjust volume or pan the song waveform analyzer down below. Looping can be activated by clicking on Loop, from again the Controls section. For looping only a certain part of the song, mark it on the waveform down below and click Loop up top.

Even though you can listen to only one song at a time, this free audio player offers a lot of interesting features, which are aimed more to quality lovers, seeing how only lossless audio formats can be played. Bonis Audio Player is portable and free, so it costs you nothing and you don’t have to install it in order to give it a try. Free download.